Karnataka: 23 old faces, 6 new ones inducted as ministers into Basavaraj Bommai's cabinet; here's all you need to know 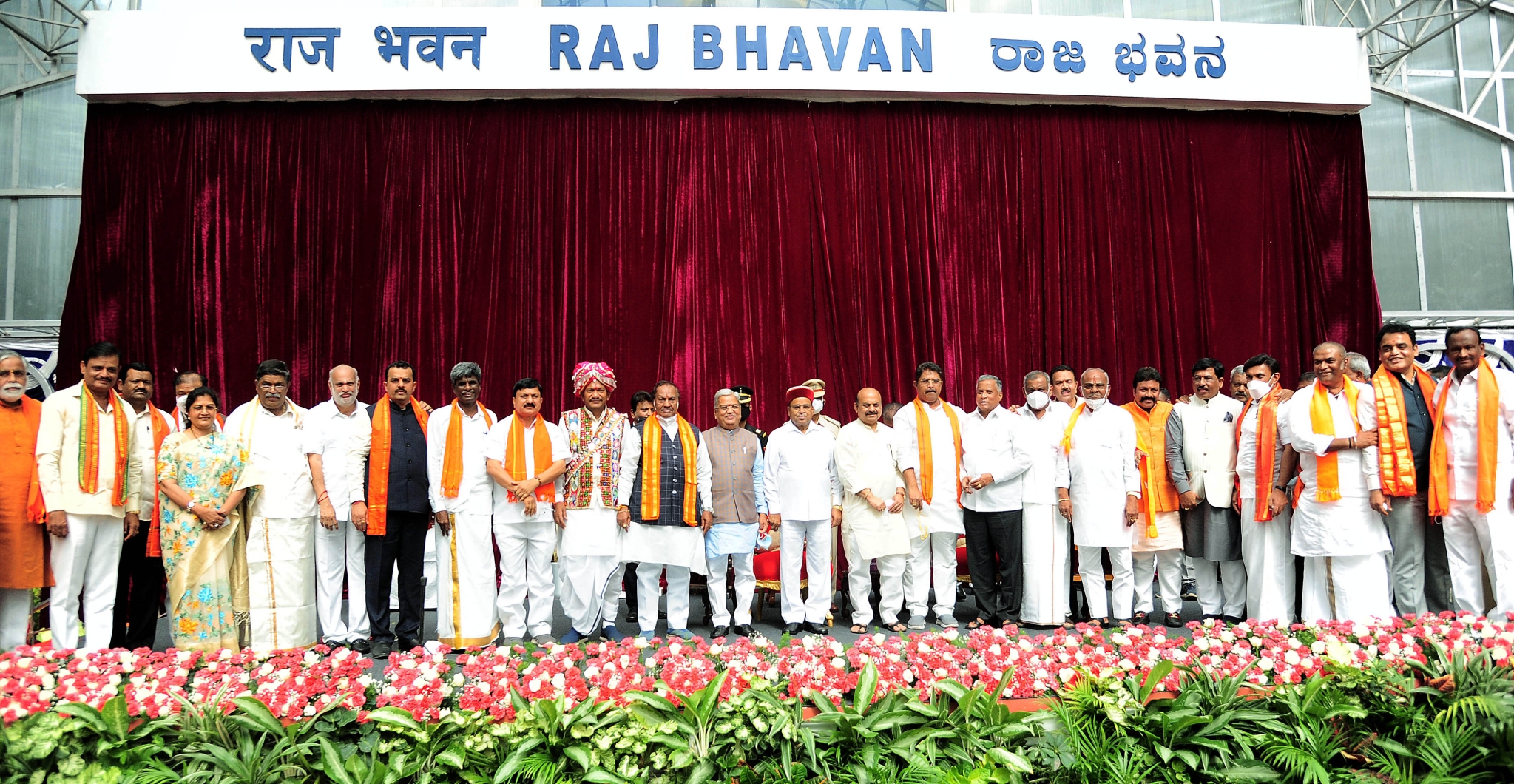 Bengaluru: A week after taking oath, Karnataka Chief Minister Basavaraj Bommai Wednesday inducted 29 MLAs as ministers into his Cabinet, but not without some drama. While 23 ministers are old faces who were part of the previous BS Yediyurappa cabinet, six are new.

When Bommai took an early morning flight from Delhi to Bengaluru Wednesday, he had no inkling on who would figure in his Cabinet. The party high command later in the day faxed the names and the CM did a postman’s job of forwarding the same to Governor Thaawarchand Gehlot who administered the oath of office to the new ministers.

The high command nixed Bommai’s plea of having four Deputy CMs. This was done as Yediyurappa wanted his son BY Vijayendra as one of the Deputy CMs. When the high command refused, BSY traded off with a demand of keeping the critics who made his life miserable out of the new cabinet.

Former deputy CMs — Govind M Karjol and C N Ashwathnarayan — were among those who were sworn in as ministers.

The high command’s list went by the time-tested case equation of having eight Lingayats, seven Vokkaligas, seven OBCs, three SCs, two Brahmins, one Scheduled Tribe and one Reddy, and a woman.

Sashikala Jolle is the only woman who is part of the new cabinet. She made it in the nick of time as she was in Delhi lobbying for a berth and the Karnataka police had to provide her with a zero-traffic corridor to reach the Raj Bhavan on time.

There was some colour too when three-time MLA from Bidar district Prabhu Bhamla Chavan took oath as minister wearing the traditional attire of the Lambani community.

The new Cabinet reflected a serious imbalance as 13 districts went without representation.

The portfolios would be announced in the next few days, party sources indicated.

Later, in the first meeting of the new cabinet, the focus was on means to tackle the floods and Covid-19 in various parts of the state.

“All ministers will be assigned a respective district after which they will review the Covid-19 and flood situation across the state. The ministers will also be asked to submit a detailed report to enable the government to take the right remedial measures, also seeking additional relief assistance, if needed, to resolve issues faced by the people,” Bommai said.

Further, the cabinet also decided to reconstitute the Covid-19 task force. Karnataka has been reporting more infections when compared to the previous weeks with cases on the rise in different districts including Bengaluru, Dakshina Kannada, Belagavi, and Mysuru.

The cabinet also decided to establish an exclusive secretariat for the welfare of Scheduled Tribes for effective monitoring and implementation of STP programmes. This has been a long-pending demand by the ST community.

Here’s the full list of ministers who were inducted into the Basavaraj Bommai-led Karnataka cabinet: