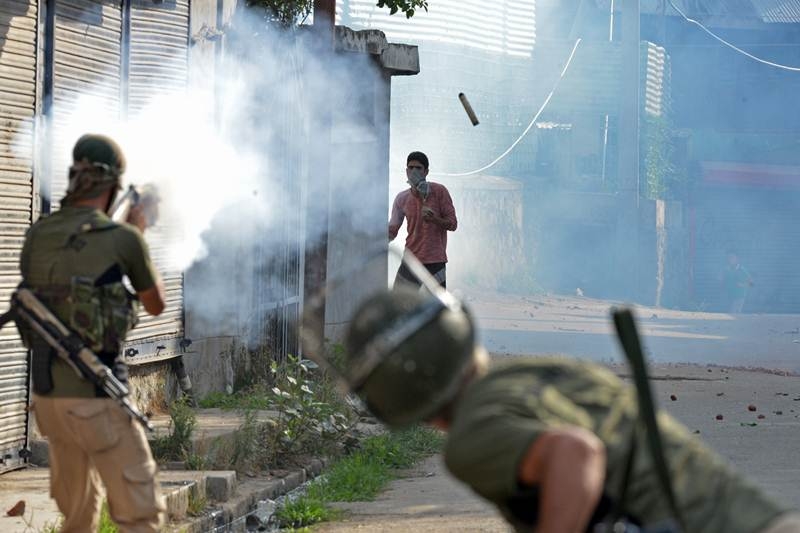 Kashmir: The Resistance Front (TRF) commander was among five terrorists killed on Wednesday in twin encounters with security forces in Jammu and Kashmir's Kulgam district, said Jammu and Kashmir Police.

Two encounters took place at Pombay and Gopalpora villages of the Kulgam district.

Besides this, a major tragedy was also averted after arresting two terrorist associates in Pulwama district along with two ready-to-use Improvised Explosive Devices (IED).

"Acting on specific inputs generated by Kulgam Police about the presence of terrorists in twin villages of Kulgam, two anti-terrorist operations were carried out in which five terrorists were eliminated. The killed terrorists include terrorist commander of proscribed terror outfit TRF namely Aafaq Sikander," the police said.

The police further said that during both the operations, ample opportunities were given to the trapped terrorists to surrender, however, they started firing indiscriminately on the search teams which was retaliated leading to encounters.

In Gopalpora area, two terrorists were killed and their bodies were recovered from the site of the encounter.

They have been identified as Aafaq Sikander Lone, District commander of TRF) son and Irfan Mushtaq Lone. The police also recovered one AK-47 rifle and one pistol.

As per police records, killed terrorist Aafaq Sikendar was involved in many terror crime cases including in civilian atrocities and attacks on security forces.

He was involved in the killing of police personnel Nissar Ahmad Wagay on August 7, 2021, at Pambay Crossing, killing of non-local labour Shankar Kumar Choudhary at Nehama Kulgam on September 17, 2021.

"Besides, he was also involved in grenade attacks on security forces including an attack on 18Bn CRPF at Nehama. He also carried out an attack on SHO Manzgam in which 04 police personnel got injured," it added.

Similarly, in the encounter at Pambay, three terrorists were killed and their bodies were retrieved from the site of the encounter.

Two of them have been identified as Shakir Najar, Deputy District Commander of Harkat-ul-Mujahideen (HM) and Sumair Najar affiliated with proscribed terror outfit HM and TRF respectively.

"While as the identification and affiliation of the third killed terrorist is being ascertained. As per the source, the third terrorist might be Aslam Dar District Commander of HM. However exact identification will be established after matching of DNA samples," the police further said.

"Incriminating materials, including arms and ammunition (two AK-47 rifles and one pistol) were recovered from both the sites of encounters. All the recovered materials have been taken into case records for further investigation," the police said.

Kashmir Inspector General of Police (IGP) Vijay Kumar has termed both operations as a big success and congratulated the joint teams for carrying out the said operations in a professional manner without collateral damage.

Police have registered cases in both the incidents under the relevant section of law in respective police stations and further investigation is in progress.

"Acting on a tip-off, a joint Naka was established by Pulwama Police, 55RR and 182Bn of Central Reserve Police Force (CRPF) at Circular Road Pulwama. The joint team apprehended two active terrorist associates of proscribed terror outfit LeT. They have been identified as Amir Bashir Dar son of Bashir Ahmad Dar resident of Sirnoo Pulwama and Mukhtar Ahmad Bhat son of Abdul Jabar Bhat resident of Matri Bugh Shopian. Incriminating materials including 02 ready to use IEDs were recovered from their possession.

In this regard, a case under relevant sections of law has been registered at Pulwama Police Station and further investigation has been initiated.

Moreover, on Wednesday terrorists hurled a grenade upon ROP of 45Bn CRPF at Palhallan Chowk area of Baramulla which missed the intended target and exploded on road.

"In this terror incident, three civilians and two CRPF personnel sustained splinter injuries and were immediately shifted to a nearby hospital for the treatment of their injuries where their condition is stated to be stable. In this connection, police have registered a case and investigation is in progress," it added.