The spectre of climate change is here to stay and even worsen, say climate scientists as searing winds blow across swathes of north India, including New Delhi where temperatures have crossed 49 degrees Celsius, and flash floods ravage parts of the northeast.

A day after two weather stations in Delhi saw temperatures of more than 49 degrees Celsius and neighbouring Gurgaon registered 48 degrees Celsius, the highest since May 1966, experts on Monday analysed the incidence of extreme weather events and sounded a dire warning.

“With increasing temperatures as a result of global warming in South Asia and the consequent exceeding levels of heat and humidity, it is predicted that we will have more intense, longer and frequent heat waves in India,” environmentalist and climate scientist Shakil Ahmad Romshoo told PTI in a phone interview from Srinagar.

“Over the last few decades, global warming has been on an accelerated pace and its marks can be seen in any single day of global weather since the 2000s. Generation Z has never lived a day without feeling the influence of global warming,” added Roxy Mathew Koll from the Indian Institute of Tropical Meteorology in Pune.

The national capital recorded its second hottest April this year since 1951 with a monthly average maximum temperature of 40.2 degrees Celsius. Other north Indian states, including the hill areas of Uttarakhand, Himachal Pradesh, Jammu and Kashmir and Ladakh, also recorded temperatures way above the normal level this season.

While north India battled high temperatures, parts of Kerala and Lakshadweep islands saw heavy rainfall on Sunday. Besides, the weather office sounded a red alert across five districts in Kerala. And in the east, Assam’s Dima Hasao district has been hit by flash floods and massive landslides at several places, snapping rail and road links.

According to Indian Meteorological Department data, the average maximum temperature over northwest and central India for April this year has been the highest in 122 years.

Regardless of local weather interactions, Koli explained, the root cause for increase in such events in the India-Pakistan region is global warming due to human-made carbon emissions.

“March 2022 was India’s hottest March in recorded history (1901-2022). The temperatures were high in entire India, especially the northwest regions that underwent a heat wave. Temperatures continued to run significantly above normal in April 2022 over large parts of India, excluding south India,” Koll told PTI in an email interview.

The low pressure anomaly caused by the weather event know as La Nina over the Indian subcontinent has been inviting westerly winds and the blast of hot air from the Middle East into India.

“The north-south pressure pattern has been persisting over India, with La Nina extending its stay over the Pacific. This has definitely impacted the weather over India, which has been seen even during 1998-2000 when La Nina had persisted for three years,” said Raghu Murtugudde, professor, department of atmospheric and oceanic science, University of Maryland, US.

“We did see some strange weather activities this year as well which include duststorms over Mumbai, early deep depressions out of which one even became feeble cyclone and the heatwaves… all part of this weird and extended persistence of La Nina,” Murtugudde said.

The impact of severe heat waves on different sectors, including health, work, quality of life and the economy, is well documented.

According to official records, heat waves have caused over 24,000 deaths from 1992 to 2015 across the country. A recent report from the Ministry of Earth Sciences pointed out that the mortality rates per million for heat waves have increased by 62.2 per cent during the last four decades.

“Heat waves affect work productivity by reducing performance and increasing the heat-related illness. A decline of 30-40 per cent in the work performance is projected over India by the end of the century due to the elevated heat stress levels,” Murtugudde explained.

The impact of climate change is amplified in cities, since urban areas are usually warmer than their surroundings due to concentrated structures and less greenery, he said.

In Romshoo’s view, heat waves, which are predicted to be more frequent, deadly and longer in the country, will affect every sector of the economy.

“Look at the severity of the heat wave this year, it is concentrated in both Indus and Ganges river basins which produce and supply much of the food supplies in Pakistan and India. Heat waves are also projected to enhance the melting of glaciers in the region which is already facing water scarcity.” The scientists said if the frequency of heat waves continues as is predicted, these will adversely impact food, water and energy security in the region.

As the globe hurtles towards climate disaster, what is the way out? Romshoo said the impact on cryosphere (snow and glaciers) and the predicted increase of hydro-meteorological disasters are worrisome.

“… these need to be addressed sector-wise through development of robust and judicious strategies and policies based on scientific inputs and guided by knowledge.” Koll said the need is to adopt a long term vision with policies that help in managing work hours, public infrastructure, schools, hospitals, workplaces, houses, transportation, and agriculture for heat waves to come.

“The government must take proactive measures in urban planning by investing in green and blue infrastructure, such as green walls, greenways, urban forests, green roofs, and water bodies to cool urban areas. Street trees must be planted at a large scale to reduce heat stress and the urban heat island effect,” Singh added. 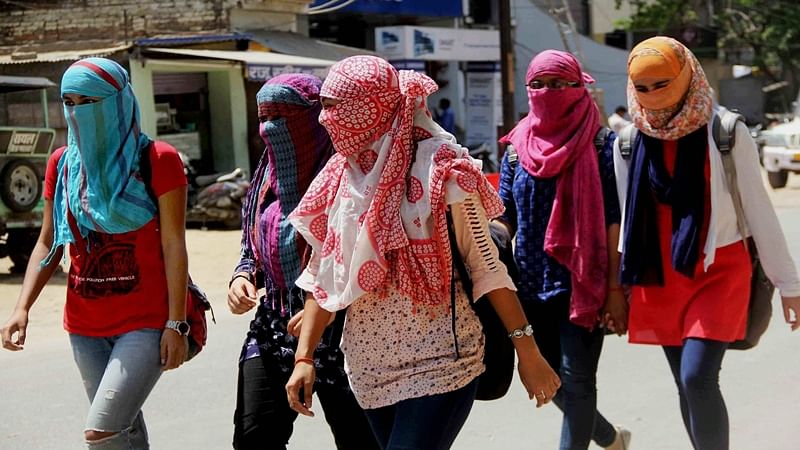