If Imran Khan is so generous, he should hand over JeM chief Masood Azhar to India: Sushma Swaraj 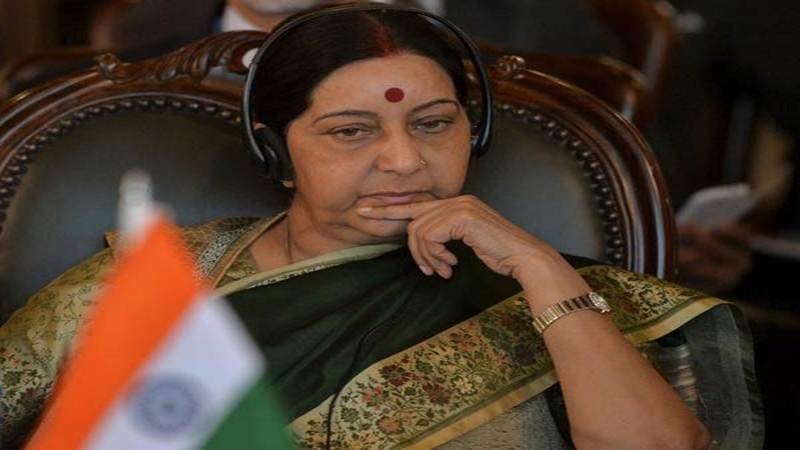 New Delhi: India cannot have a dialogue with Pakistan unless the neighbouring country takes action against terror groups operating from its soil, External Affair Minister Sushma Swaraj has said. Speaking at an event here, Swaraj said on Wednesday, “We do not want talk on terror, we want action on it. Terror and talks cannot go together. We are ready to engage with Pakistan in an atmosphere free from terror.”

“Some people say (Pakistan Prime Minister) Imran Khan is a statesman. If he is so generous then he should hand over JeM chief Masood Azhar to India. Let’s see how generous he is,” she said.

#WATCH EAM Sushma Swaraj in Delhi: We are ready to engage with Pakistan in atmosphere free from terror. Some people say Imran Khan is a statesman, if he is so generous then he should hand over JeM chief Masood Azhar to India. Let’s see how generous he is. (13.03) pic.twitter.com/kgnDfv8gOY

“Pakistan needs to control the ISI and its army who are bent on destroying the bilateral relations time and again,” she said.

Swaraj’s remarks came hours before the deadline to raise objection to the listing of a proposal to declare Jaish-e-Mohammed chief Azhar as a global terroristÂ before the 1267 Al Qaeda Sanctions Committee of the UN Security Council.

For the fourth time in the last ten years, China on Wednesday blocked the proposal moved by the US, France and the UK, among others, on February 27. Terming the UNSC a “non-effective organisation”, Swaraj saidÂ that it does not reflect today’s “geopolitical reality”.

“We all know that the UNSC is the non-effective organisation in today’s world. The entire world is in turmoil, not just the Middle East, but the organisation is unable to do anything. Because it does not reflect the geopolitical reality.”

“India is not a part of the organisation (as a permanent member). India was not even independent at the time of the United Nations formation. So tell me, the kind of organisation which does not reflect today’s geopolitical reality will solve the world problems,” he added.