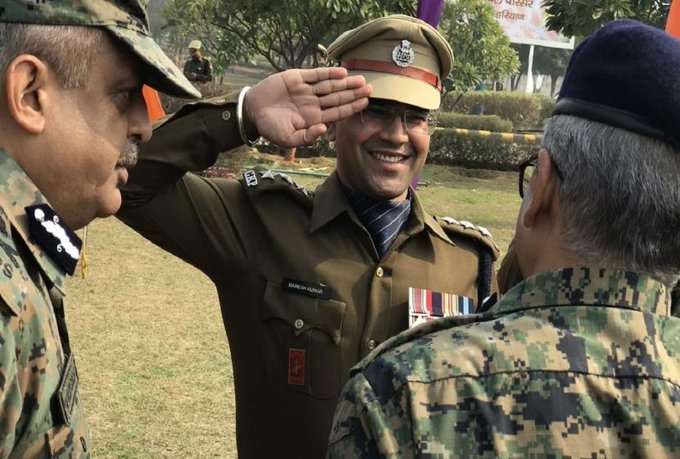 CRPF officer Naresh Kumar was on Friday awarded yet another gallantry medal, his seventh in the last four years, for leading his troops in an operation that resulted in the killing of three terrorists who attacked a security force camp near the Srinagar airport in 2017.

The 35-year-old assistant commandant (AC), who joined the Central Reserve Police Force in 2013, has been decorated with the "6th bar to Police Medal for Gallantry" on the eve of the Independence Day.

"This is his seventh bravery medal in the last four years. He has become the highest medal winner after second-in-command rank officer P R Mishra of the force who has won six such medals. including the third highest peace time medal Shaurya Chakra," a senior CRPF officer said.

Kumar told PTI he was "elated with the news of the latest medal".

"I wish to keep serving my country and this is what I donned my uniform for," Kumar, now posted in Delhi, said.

Kumar, who hails from Hoshiarpur in Punjab, was first awarded with a gallantry medal in 2017 and has been heading the elite quick action team (QAT) of the central force in the Kashmir Valley till recently.

"I joined Kashmir as soon as I passed out from the academy. I wish to go back to Kashmir on posting again," he said.

The CRPF called Kumar an officer with "sharp tactical acumen and indomitable courage".

The officer holds a B.Tech from Punjabi University, Patiala and his wife, also his batchmate, Assistant Commandant Sheetal Rawat serves in the CRPF.

The CRPF QAT is virtually a part of every counter-terrorist operation conducted by the joint forces that include the state police and the Army.

"This year alone, the valley QAT has been adorned with more than 15 gallantry medals," a CRPF spokesperson said.

Former CRPF Inspector General (Kashmir) Ravideep Singh Sahi has also been awarded the Police Medal for Gallantry (PMG), as per the awardees list issued by the Union home ministry on Friday.

"Out of the 55 gallantry medals awarded to the force, 41 were awarded for operations in Jammu and Kashmir while 14 relate to the operations against maoists in Chhattisgarh," the spokesperson said.

A team of the 208th battalion of CoBRA commandos that undertook a fierce gunbattle with Naxals in the Left Wing Extremism affected Sukma district of Chhattisgarh and reportedly killed nine ultras in 2016 has also been given eight bravery medals, including three posthumously.

The force has been awarded 63 medals for meritorious and distinguished service that includes Deputy Inspectors General Annie Abraham and Yogyan Singh.