As a result, Chennai witnessed the heaviest rainfall it has seen in six years since the 2015 floods.
FPJ Web Desk 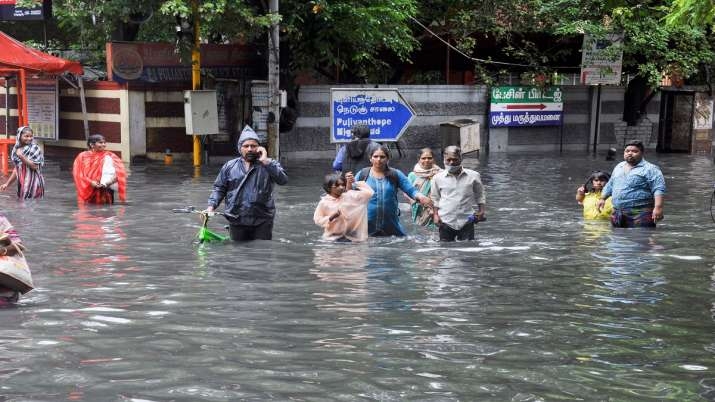 Waterlogging in Chennai due to heavy rain showers | Photo: PTI

Heavy rains continued to lash Chennai and other regions, including northern districts such as Chengelpet, Kancheepuram, Tiruvallur, and Vellore, rains were in most regions mild to moderate and intermittent since early Monday.

TN is set to receive heavy to very heavy rainfall in the next 48 hours, according to IMD report. The IMD has issued an Orange Alert for 14 districts of Tamil Nadu, which include Nagapattinam, Ranipet, Salem, Kanchipuram, Tiruvannamalai, Mayiladuthurai, Villupuram, and state capital Chennai.

As a result, Chennai witnessed the heaviest rainfall it has seen in six years since the 2015 floods.

As man as four people have been reported killed in rain-related incidents in Tamil Nadu and over 60 houses suffered damage, authorities informed.

While authorities disconnected power supply here in vulnerable neighborhoods as a precautionary measure and have warned of heavy rains to continue for the next coming days until number 11.

"The cyclonic circulation over the southeast Bay of Bengal and adjoining south the Andaman Sea extends up to middle tropospheric levels. Under its influence, a low-pressure area is very likely to form over the southeast Bay of Bengal and neighborhood during the next 24 hours. It is likely to move west-northwestwards, concentrate into a Depression and reach near north Tamil Nadu coast by the early morning on Thursday," the IMD report mentioned. On November 7, 36 out of Tamil Nadu’s 38 districts witnessed heavy rainfall, with the Indian Meteorological Department (IMD) issuing a ‘red’ category warning. Of these, the state capital of Chennai recorded the highest rainfall at 134.29 mm in 24 hours, as per an official statement.

Most roads and bylanes and a section of subways remained waterlogged and continued to be closed. Traffic diversion too continued and road-users had a tough time. A flooded city police station (Adambakkam) had to be shifted to another temporary premise.

The Chennai Corporation has set up pump sets in 500 locations to remove the logged water. Further, 1,00,000 food packets were also distributed for breakfast. Relief camps providing food, shelter, and medical care have been opened in the city. So far, 2,02,350 people in affected areas have been provided food since Sunday afternoon, authorities said.

PM Modi tweeted, "Spoke to Tamil Nadu CM and discussed the situation in the wake of heavy rainfall in parts of the state. Assured all possible support from the Centre in rescue and relief work. I pray for everyone's well-being and safety."

Spoke to Tamil Nadu CM, Thiru @mkstalin, and discussed the situation in the wake of heavy rainfall in parts of the state. Assured all possible support from the Centre in rescue and relief work. I pray for everyone’s well-being and safety.

Speaking on the situation in Tamil Nadu, ANI quoted Director-General of the National Disaster Response Force SN Pradhan saying, "The first stage of the Chennai rains is almost over. However, IMD has predicted extreme rainfall for the next 3 days. Hence, more than 20 NDRF teams will be deployed in Tamil Nadu and Andhra Pradesh." "We have posted more than 100 teams all over the country on standby. If need be, airlifting can be done but it's not expected," he added. According to the PTI reports, Tamil Nadu CM MK Stalin visited affected areas in Chennai and its suburbs on Sunday and directed officials to expedite rescue and relief work. On Monday morning, about 1,29,00 breakfast packs of 'Pongal' and 'Ravakitchadi' prepared in community kitchens were served to people in affected areas. Over two lakh packets of lunch, comprising a variety of rice like sambar, lemon, brinjal, and tamarind were provided to people, a civic agency release said.

Fishermen are advised not to venture into these areas, the IMD said.

The weather office said a depression over the east-central Arabian Sea has moved west-northwestwards in the last six hours with a speed of 8 kmph and lay centered over the East-central Arabian Sea about 840 km west-southwest of Mumbai and 800 km west-southwest of Panjim. It is likely to move nearly westwards and weaken into a well-marked low-pressure area by Tuesday morning.

Extremely heavy rainfall is likely over some parts of Tamil Nadu and Andhra Pradesh on November 10 and 11 which may inundate roads and low-lying areas, and cause riverine flooding in some catchment areas, the India Meteorological Department said on Monday.

(with inputs from agencies and sources)