Born on June 19, 1970, Congress leader Rahul Gandhi turned 51 today. As he turns 51, the former Congress president said he will not celebrate his birthday this year due to the pandemic. Instead, the National Students Union of India (NSUI) and the Indian Youth Congress (IYC) has planned to organise free COVID-19 vaccination drives at its offices for the people.

NSUI National President Neeraj Kundan told IANS that they are organising a free vaccination drive on Rahul Gandhi's birthday (June 19). Adding further he said, “Rahulji believes that rather than chasing virus we should get vaccinated so that virus cannot chase us.”

Similarly, IYC will be holding vaccination drive across the country for senior citizens, daily wage workers and frontline workers who have not been vaccinated.

Rahul Gandhi announced his entry into Indian politics in March 2004. In 2013, he was elected as the Congress Vice President. He was also the General Secretary of the Indian National Congress from September 25, 2007 to January 19, 2013. He was the President of the Indian National Congress from December 16, 2017 to July 3, 2019. After stepping down as Congress chief, he was succeeded by Sonia Gandhi (interim) in 2019. In the same year, he contested the Lok Sabha elections from Amethi and Wayanad. He won the Wayanad seat, however, lost his family bastion of Amethi to BJP's Smriti Irani.

On his 51st birthday, here's a look at some candid moments of Rahul Gandhi.

Congress President Rahul Gandhi on July 20, 2018, surprised members of the Lok Sabha when after bitterly criticising the BJP-led government during the no-confidence motion, he walked across to the treasury benches and hugged Prime Minister Narendra Modi.

2. Rahul Gandhi jumps into sea to swim with fishermen 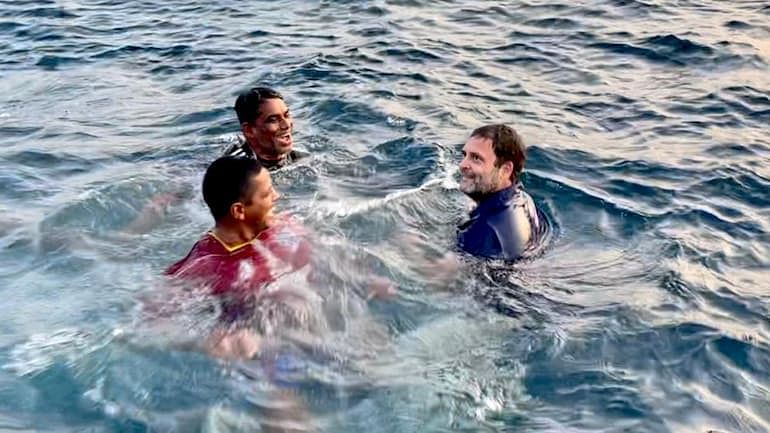 Congress leader Rahul Gandhi on February 24, 2021 took part in a fishing exercise in poll-bound Kerala's Kollam district. During the exercise, he jumped into the sea along with fishermen as they cast their nets.

Shri @RahulGandhi joined the fishermen of Kollam as they toiled for the morning catch on the high-sea.#KeralaWithRahulGandhi pic.twitter.com/etXe1v3Nhu

Congress leader Rahul Gandhi on March 22, 2021 visited St Teresa's College in Kerala's Kochi. Gandhi taught the students of St. Theresa College some principles of Aikido, a form of martial art. He is known to be a fitness enthusiast and is trained in Aikido.

He tried out the local tea at Murugesan’s tea stall in Adaikilapattanam in Tamil Nadu.

Rahul Gandhi helped a nine-year-old boy come one step closer to his dream of becoming a pilot. He recently took to Instagram to share a video of him talking to the little boy, Advait, and asking him about his dreams and aspirations.

"No dream is too big. We've taken the first step to make Advait's dream come true. Now it is our duty to create a society and a structure that will give him every opportunity to fly,” he captioned the video.

A video of Congress leader Rahul Gandhi relishing a spicy 'kalaan biryani' (mushroom biryani) and an onion side dish he made, with Tamil Nadu villagers in true south Indian style, went viral. The video, uploaded by ‘Village Cooking Channel’ on YouTube, shows the Congress MP sharing the meal, besides preparing onion raita, the ubiqitous Tamil Nadu side dish that matches any type of biryani.

9. Rahul Gandhi has meal at 'Kamboj Dhaba' in Haryana's Indri In March 2019, Rahul Gandhi along with senior party leader Ghulam Nabi Azad had a meal at 'Kamboj Dhaba' in Haryana's Indri. On December 20, 2018, Rahul Gandhi engaged in a game of chess with specially-abled children at the Institute for Children with Special Abilities (ICSA) in Shimla along with his nephew, Raihan Vadra.