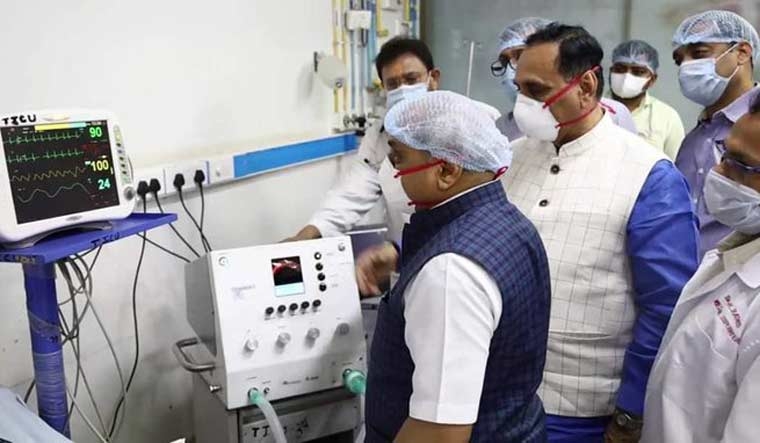 Ahmedabad: In a scathing report on major fires at Gujarat’s Covid-19 hospitals in 2020 that claimed 13 lives, the inquiry commission has found that the blaze in one of the facilities was sparked off from the controversial Dhaman ventilators.

The Dhaman brand of ventilators, which were made by a Rajkot-based company allegedly close to the outgoing chief minister Vijay Rupani, had invited widespread criticism over its efficacy. To such an extent that the machines were reported unfit to work as ventilators.

These were installed at the Uday Shivanand Covid-19 Hospital in Rajkot where a fire in its ICU in November last year snuffed out five lives.

The Inquiry Commission, headed by retired Gujarat High Court judge Justice DA Mehta, found that the hospital had installed “Dhaman” brand ventilators in the ICU, and the cause of the fire was a short circuit that occurred in it. The management told the inquiry commission that they had not purchased the ventilators, but had only “brought them from the company for the purpose of using it”.

The report stated, “The management has not purchased the ventilators, and is not in a position to take any action against the manufacturer. This is despite, even if a piece is found to be defective or of sub-standard quality.”

What is more, the Rajkot hospital’s emergency exit door was closed and blocked by medical equipment stacked directly across the door.

Interestingly, the report was tabled in the just-concluded two-day assembly session held under a new BJP Government.

The Justice Mehta Commission also went into the Shrey Hospital fire in Ahmedabad in August last year where eight Covid-19 patients were killed.

The inquiry commission found untrained staff and obsolete equipment among the reasons for the fire in the ICU ward on the fourth floor.

The ICU’s fire alarm system, smoke sensors and/or sprinklers were found to be either missing or in an incorrect format.

The cause of the fire at Shrey Hospital was found to be an old patient-monitoring system, which was 15 years old. Patient monitoring systems installed in hospitals have a life span of five years.

Here, the system was purchased in 2006-2007 and had been operational since then. It was never replaced or renewed, only serviced. Thus, rendering it obsolete.

The ICU’s windows were also fitted with glass screws. When the fire broke out in the ICU on August 6, 2020, the smoke remained locked inside the ICU. The report blames the hospital’s management and owner Bharat Mahant for the incident.

Due to varied obstructions in the margin area, fire personnel were forced to go on the terrace to access the ICU which was on the fourth floor of the hospital. This resulted in a delay, causing the death of seven patients due to asphyxiation and one patient died of burn injuries, the Commission stated.