The collision took place between bulk carriers MVs Aviator and Atlantic Grace off the coast of Gujarat, the PRO stated.
FPJ Bureau 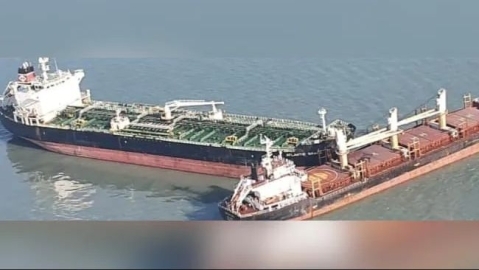 In a major incident on Friday night, a collision took place between two cargo ships in Gujarat's Gulf of Kutch, one of the busiest routes on India’s oil trade causing an oil slick in the Arabian sea.

Confirming the incident, the State’s Defence PRO said in a tweet that there were no casualties.

The collision took place between bulk carriers MVs Aviator and Atlantic Grace off the coast of Gujarat, the PRO stated.

Indian Coast Guard ships in the vicinity have been put on the stand-by while the situation continues to be monitored, said the PRO.

A pollution control vessel in the area has also been put on stand-by.

“Collision between MVs Aviator and Atlantic Grace in GoK on 26 November night. No casualties, oil slick reported. @IndianCoastGuard Ships in the area incl. Pollution Control stand-by in the vicinity & monitoring the situation,” the Gujarat defence PRO said in the tweet.

An ecologically sensitive zone, the Gulf of Kutch has been a witness to several oil spill incidents in the past.