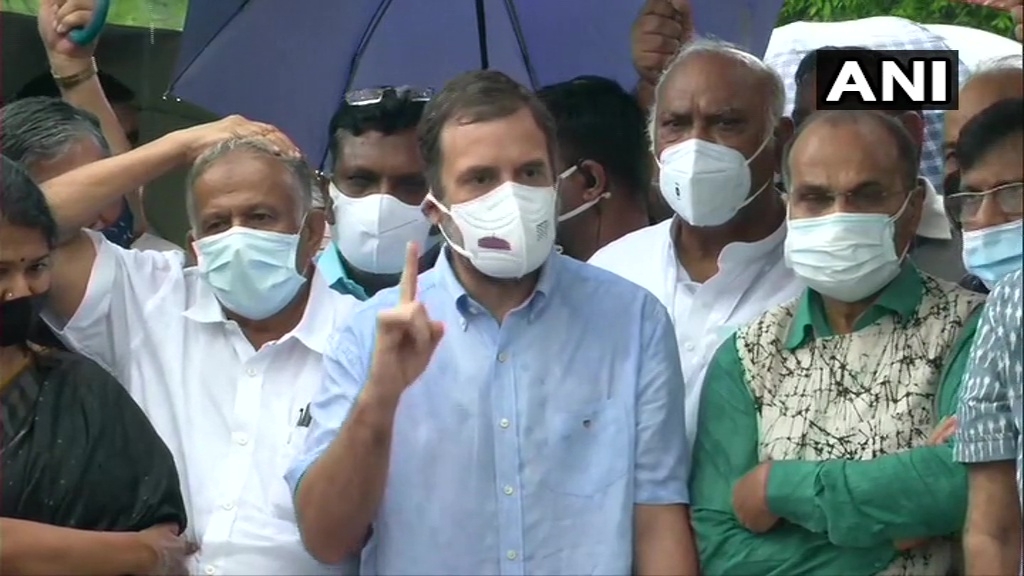 Congress leader Rahul Gandhi Wednesday said the Opposition was united in demanding a discussion on the Pegasus snooping row in Parliament in the presence of the Prime Minister or the Home Minister.

Upping the ante against the Central government, Rahul Gandhi accused it of "curtailing" the voice of opposition in Parliament and said that the government has used Pegasus weapon against the people of the country.

Addressing the media, Rahul Gandhi said, "The entire opposition is here... our voice is being curtailed in Parliament." He said that we are only asking if the Pegasus software was bought and if it was used against certain persons in India.

He also attacked the government over the Pegasus snooping row, accusing Prime Minister Narendra Modi and Home Minister Amit of "hitting the soul of India's democracy".

"We want to ask just one question. Has the Government of India bought Pegasus? Yes or No. Did the Government use Pegasus weapon against its own people? We have been told clearly by the Govt that no discussion will take place on Pegasus in the House," Rahul Gandhi said.

"I want to know from the youth of the country - Narendra Modi Ji has sent a weapon in your phone. This weapon has been used against me, Supreme Court, many leaders, people in the press & activists. So why it should not be discussed in the House?" he asked.

The voice of Opposition was being suppressed in Parliament, he alleged. "It is being said about us that we're disturbing Parliament proceedings. We are not disturbing the House. We just want to fulfill our duties. This weapon (Pegasus) has been used against India. It should be used against terrorists and anti-nationals," Rahul Gandhi said.

He also said the Pegasus row "for us is an issue of nationalism, treason". "This is not a matter of privacy. It is an anti-national work," he added.

His remarks came after a meeting of 14 opposition parties earlier in the day to chalk out a strategy to take on the government over the Pegasus tapping issue, which has snowballed into a massive political row. The Pegasus issue has forced repeated adjournments during the Monsoon Session of Parliament.