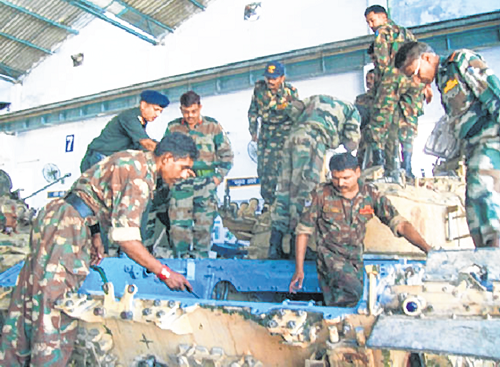 New Delhi: In a major decision, the defence ministry has decided to either close down or hand over to the private contractors the Army workshops that handle repairs and overhaul of weapons, vehicles and equipment holding them as relics of the Second World War.

Army’s four base workshops will be corporatised in April under the government-owned contractor operated (GOCO) model, according to the information placed in Parliament by the ministry. These workshops are 512 ABW at Kirkee, 506 ABW at Jabalpur, 508 ABW at Allahabad and 510 ABW at Meerut. In the second trance, four other workshops to be handed over to the private contractors by December are 505 BAW at Delhi, 507 ABW at Kankinari, 509 ABW at Agra and 515 ABW at Bengaluru, the last one tasked with indigenisation of spares and manufacture of simulators.

The facilities of the workshops will remain under the ownership of the government while the contractors will be responsible for the day-to-day operations, plant maintenance and meeting targets. In addition, two advance base workshops at Udhampur near Jammu and Narangi near Guwahati as also the static workshop at Delhi will be disbanded in March. At the same time, an exercise has begun to optimise 29 out of the 31 station workshops by restructuring their administrative set up and redeploying manpower.

The ministry sources said the whole exercise is part of the government’s plan to rationalise the army manpower as recommended by the Lt General D B Shekatkar committee. The handover of ABWs to private contractors will free up large number of technical officers up to the rank of brigadiers who will be moved to other positions. The ministry may even take over the control of these workshops from the Army headquarters.