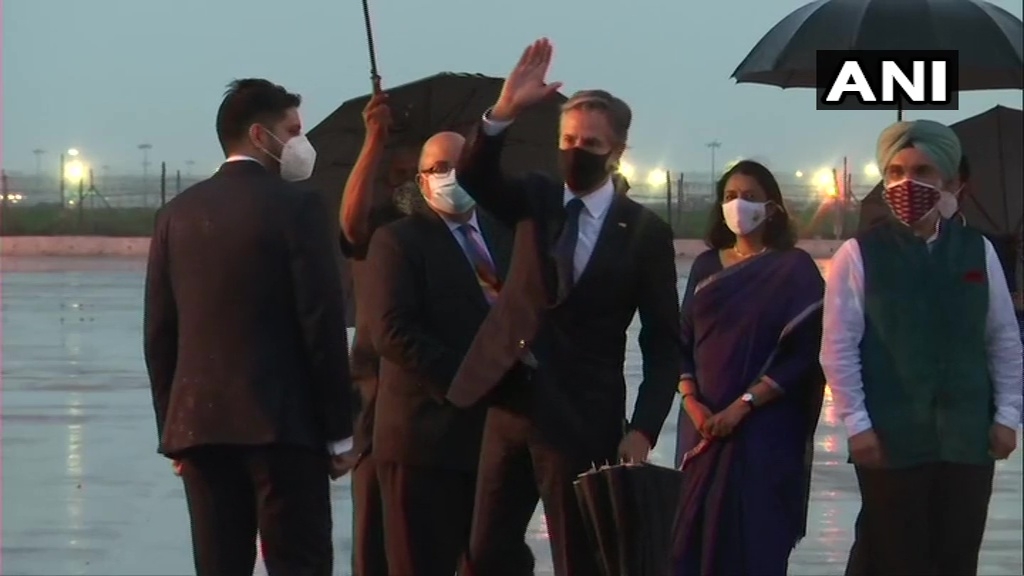 US Secretary of State Antony Blinken arrived for a two day visit to India on Tuesday evening. He is slated to meet with a slew of Indian leaders including Prime Minister Narendra Modi, External Affairs Minister S Jaishankar and National Security Advisor Ajit Doval today to discuss "a wide range of issues including continued cooperation on COVID-19 response efforts and Indo-Pacific engagement". On his maiden visit, the US official described India as a "leading global power and a key US partner".

According to a media advisory released by the Ministry of External Affairs, Blinken will be in Delhi for a little over 20 hours. His meeting with Jaishankar is scheduled to begin at 12 pm and he will call on Prime Minister Modi at 4:30 pm. Blinken is scheduled to emplane from Delhi at 5:30 PM.

"Wheels up for my trip to New Delhi and Kuwait City. I look forward to consultations with our partners to further cooperation in support of our shared interests in the Indo-Pacific and Middle East," he tweeted.

While there is no exact itinerary or agenda avialable, Blinken's upcoming meeting with Modi is likely to touch upon a slew of current issues - ranging from China's "unwillingness" to resolve disputes peacefully to the ongoing COVID-19 pandemic. US Defence Secretary Lloyd Austin had recently spoken about Chinese "aggression against India", in an apparent reference to the eastern Ladakh standoff.

"We have also seen aggression against India. destabilising military activity and other forms of coercion against the people of Taiwan...and genocide and crimes against humanity against Uyghur Muslims in Xinjiang," he had reportedly said.

The US State Department had also mentioned recently that the US supports India's emergence as a leading global power and vital partner in efforts to ensure that the Indo-Pacific is a region of peace, stability, and growing prosperity and economic inclusion. RCEP, mega trade deal, may have short shelf-life as US moves to isolate China

According to reports, Blinken had drawn a parallel between India and the US ahead of the meetings. Both nations, he asserted, "believed in human dignity and equality of opportunity, the rule of law, fundamental freedoms including freedom of religion and belief".

In the talks, India and the US are also likely to focus on ways to augment trade and investment ties besides looking at opportunities in healthcare, education, digital domains. Keeping the ongoing COVID-19 pandemic in mind, it is likely that the discussions will also pertain to implementation of the Quad vaccine initiative.

Blinken is also expected to discuss other pressing issues including the tense situation in Afghanistan as US forces move out of the country as well as other regional security concerns. Reports suggest that the India is expected to raise the implications of the withdrawal of American troops from Afghanistan and the need for sustained pressure on Pakistan on terror financing and terrorist safe havens.

In the talks, both sides are also expected to explore ways to deepen defence collaboration, including exercises, defence transfers and technologies ahead of the next edition of the 2+2 defence and foreign ministerial dialogue to be held in the US later this year.