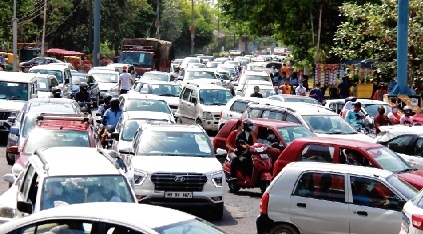 People wait during a drive-through Covid vaccination programme, as heavy traffic led to chaos in Gurugram, Haryana, on Saturday. | —ANI

New Delhi: Goods trains on the dedicated freight corridor are running at speeds faster than Rajdhani trains, with one clocking a record 99.38 kmph on Saturday, officials said. On Saturday, three trains ran at an average speed of more than 99 kmph, the fastest being on the 331-km New Khurja-New Bhaupur section of the Eastern Dedicated Freight Corridor (EDFC), which was opened for operations by Prime Minister Narendra Modi on December 29, 2020. "The highest average speed achieved was 99.38 kmph. Till date, 137 trains have attained an average speed of more than 90 kmph on this section," an official said. The other section, the 306 km between Rewari and Madar on the Western Dedicated Freight Corridor (WDFC), was opened on January 7. Till date in these sections, a total of 4,000 trains have been run with more than 3,000 trains being run on the EDFC.

New Delhi: CRPF chief Kuldiep Singh has been given additional charge of the National Investigation Agency, replacing YC Modi who retires as director general of the anti-terror probe agency on Monday, a Home Ministry order said. Modi, a 1984-batch IPS officer of Assam-Meghalaya cadre, was appointed NIA chief in September 2017. Consequent upon superannuation of YC Modi, DG, NIA, on May 31, 2021, the competent authority has appro­ved Kuldiep Singh, DG, CRPF, shall hold additional charge of the post of DG, NIA, till the appointment and joining of the successor or until further orders.

New Delhi: The CBI has recovered Rs3.01 crore, jewellery and a note counting machine during searches following the arrest of 4 Food Corporation of India (FCI) officials in a bribery case in Bhopal, agency officials said on Saturday. The arrested officials — divisional manager Harish Hinonia, managers Arun Shrivastava and Mohan Parate, manager and assistant Kishore Meena — were produced before a special court in Bhopal which send them to CBI custody till June 2, they said. The case pertains to the alleged demand of Rs1.50 lakh — at the rate of Rs50,000 a month for January, February and March — in bribe to release pending bills of a company.

Chennai: Popular Tamil lyricist Vairamuthu on Saturday announced ‘returning’ the ONV literary prize, instituted in memory of Jnanpith laureate Malayalam poet late ONV Kurup, following protests from various quarters against the award to the songwriter, who is facing “MeToo” charges. Though he said he was 'returning' the award, in effect he was declining the honour, saying he did not want the jury to face embarrassment and blamed 'vendetta' behind the decision to reconsider the award by the ONV Cultural Academy.

Aligarh (UP): The death toll in the Aligarh hooch tragedy went up to 22 on Saturday, and 28 more people were still in critical condition, an official said here. Seven people have died since Friday night, he said and added the condition of 28 people undergoing treatment at the Jawaharlal Nehru Medical College Hospital, AMU, and the Malkhan Singh District Hospital is critical. Local BJP MP Satish Gautam, however, told reporters in the afternoon the toll has "crossed 30", citing information he has received from the ground.

Jammu: The body of a Pakistani national, who succumbed to bullet injuries at a hospital in Jammu, was handed over to Pakistani Rangers by the Border Security Force at a flag meeting along the International Border in Jammu and Kashmir's Samba district on Saturday, officials said. Syed Raja Aasim (27), a resident of Danga in Lahore, suffered multiple bullet injuries when the Border Security Force (BSF) opened fire after he ignored repeated warnings. He was trying to sneak into the Indian side from the Border Outpost area of Ban Glad in the Samba sector on May 18, they said.

New Delhi: The Indian Coast Guard (ICG) Ship 'Sajag' was commissioned by National Security Adviser Ajit Doval on Saturday. According to the ICG statement, Sajag, the third in the series of 105 m offshore patrol vessels (OPVs) was commissioned by Ajit Doval, Kirti Chakra, National Security Advisor on May 29 in the presence of Dr Ajay Kumar, Defence Secretary and DG Krishnaswamy Natarajan, PVSM, PTM, TM, DG Indian Coast Guard and other senior dignitaries of the central and state government. “Sajag meaning ‘vigilant’ is a projection of Indian Coast Guard’s will and commitment ‘Ready, Relevant and Responsive’ towards the maritime interest of the nation,” it said.

Jaipur: Three persons, including a sarpanch, were arrested by the Rajasthan anti-corruption bureau for allegedly demanding a bribe of over Rs1 lakh for allowing construction on a piece of land in Pratapgarh, an official said on Saturday. The Pratapgarh gram panchayat sarpanch, Gulab Singh, had demanded bribe of Rs1.35 lakh through his middleman Mahendra Singh for allowing the complainant to continue construction on a land, ADG BL Soni said.

Jaipur: Nurseries of the Rajasthan Forest dept are developing hundreds and thousands of medicinal plant saplings that shall soon be gifted to state residents as part of state government's Ghar Ghar Aushadhi Yojana. The mega scheme plans to reach out to all 1,26,50,000 families residing in the state (according to census 2011), extending them an opportunity to take home saplings of the four selected medicinal herbs, namely Tulsi, Aswagandha, Gilloy and Kalmegh. In the 5-year duration of the scheme, each family shall be entitled to receive 24 saplings, starting 8 saplings in the first year, that aggregates to more than 30 crore saplings.