The four were booked under section 153 of the IPC which punishes "provoking with intent to cause riots".

Agra: Four people were arrested for offering 'namaz' at the Shahi mosque in the Taj Mahal premises, police said on Thursday.

The four were booked under section 153 of the IPC which punishes "provoking with intent to cause riots".

"Four tourists were arrested for offering namaz at the mosque in Taj Mahal premises on Wednesday. Three of them are from Hyderabad and one is from Azamgarh. They have been booked under the section of 153 of IPC. They have been presented in the court," said Vikas Kumar, Superintendent of Police (City).

Superintending archaeologist, ASI, Agra Circle Raj Kumar Patel said there is a Supreme Court order that prohibits offering of namaz inside Taj premises on all days except Friday.

He said even on Friday only the residents of Tajganj locality - where the mausoleum is located - are allowed to pray between 12 pm and 2 pm.

The four men were spotted offering namaz at the Shahi mosque at about 5 pm on Wednesday evening.

They were accosted by the officials from the Archaeological Survey of India and CISF and were handed over to the local police.

According to some, prohibition on offering of namaz inside the Taj mosque was unheard of till a few days back.

"Namaz has been offered at the mosque of the Taj Mahal regularly. But some days ago the Archaeological Survey of India claimed that as per the order of the Supreme Court of India offering Namaz is prohibited in the mosque premises except Friday," said Ibrahim Zaidi, the head of the Intezamia Committee at Taj Mahal.

Vinod Dixit, a tourist guide from Lucknow, who accompanied the tourists, claimed that the accused had no idea they were committing a crime.

"They had no idea that they cannot offer namaz. They did it by mistake. There wasn't even any notice board saying that it's prohibited," he said. 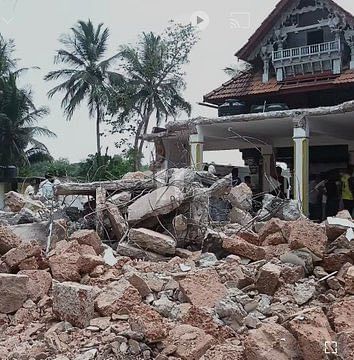