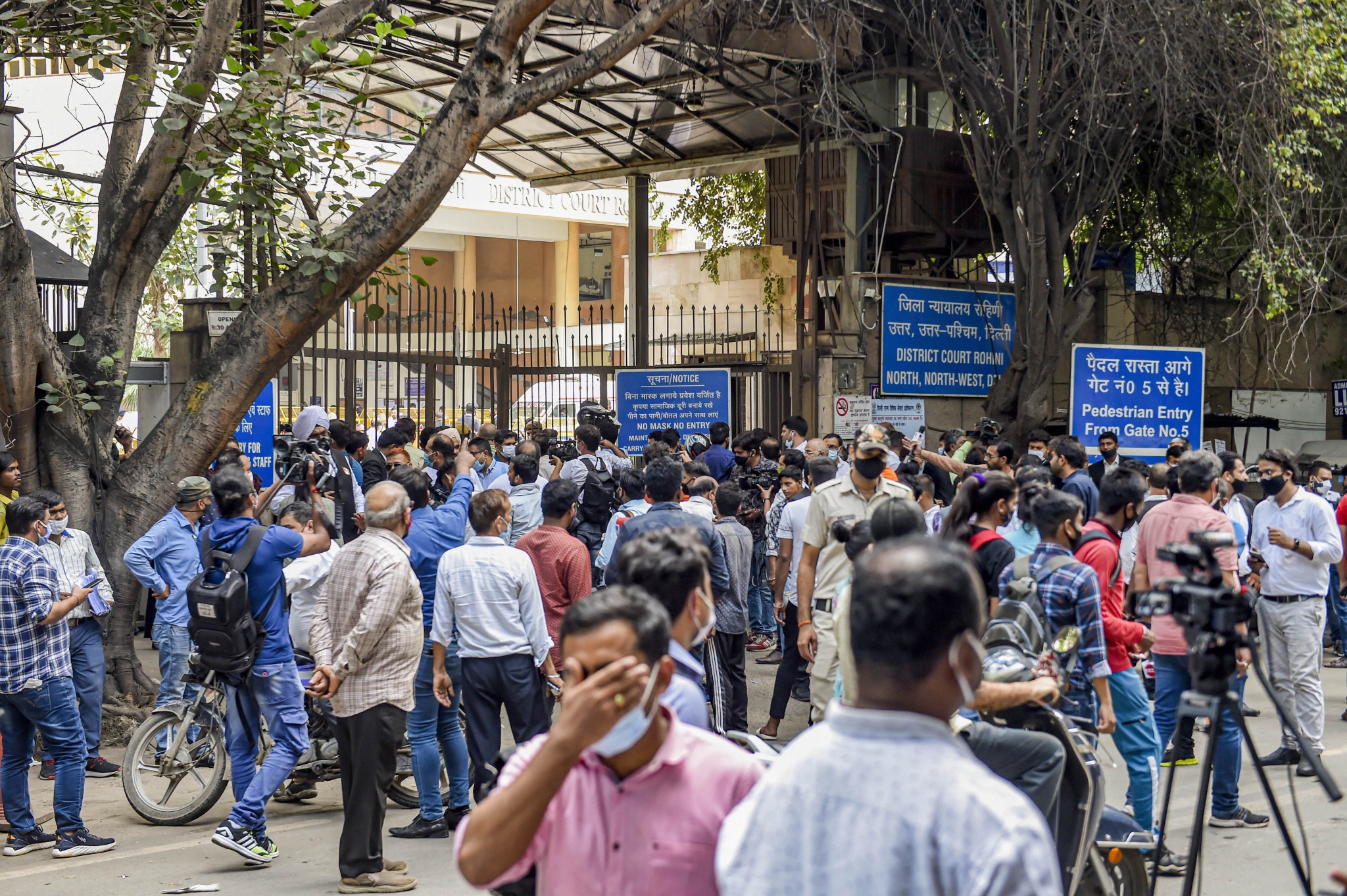 New Delhi: Media personnel and others following a shootout at the Rohini Court, where gangster Jitender Gogi was being produced, in New Delhi, Friday, Sept. 24, 2021. Gogi was killed by rival gang shooters who were later shot dead by the police in the cross-firing. | (PTI Photo/Kamal Singh)

In an incident that looked like a rip-off from a Bollywood potboiler, top Delhi gangster Jitender Maan alias Gogi was shot dead by two assailants posing as lawyers in Delhi's Rohini court premises. The police the responded and neutralized the two attackers.

Video footage of the incident, which exposed security lapses in the system, showed policemen and lawyers rushing out in panic as gunshots rang out inside courtroom number 207.

Police said the incident happened around 1.15 pm when Gogi, who was involved in over 30 heinous crimes, was taken to the courtroom for a hearing. The armed assailants, who had 0.38 bore and 0.30 bore pistols, were already seated before Gogi entered the courtroom.

Although metal detectors were at the gates of the court, it was not known whether they were working or not, and how the armed men could get past, raising questions about security arrangements.

Advocate Sunil Tomar, who was present in the courtroom for his client's bail matters, said there were 15-17 people in the court of judge Gagandeep Singh when the gangsters opened fire.

"As Gogi entered the courtroom, two persons, who were dressed as lawyers, whipped out their pistols and suddenly opened fire upon him. After hearing gunshots, people started running to save their lives and the judge also went back to his office just behind the courtroom," Tomar told news agency PTI.

Immediately, the personnel from the counterintelligence team retaliated and the two assailants died on the spot, a police officer said.

"One commando had AK-47. They were inside the courtroom and fired a single shot on the head of one of the assailants and he was shot dead. Despite firing from an AK-47, our personnel fired in complete control and there was no collateral damage. No one else sustained any injuries. It was a controlled firing," the officer claimed.

Reportedly, police suspected that Tillu gang was behind the incident, adding that according to initial investigation, the assailants, who were gunned down by security personnel on Friday, have been identified as Jagdeep alias jagga and Rahul Tyagi.

Meanwhile, speaking to news agency ANI, Delhi CP Rakesh Asthana said no one else has been injured in the firing. He added the case has been transferred to the Crime Branch.

"In view of his criminal record, Gangster Jitender Mann Gogi was being produced before the court today, under strict security arrangements but 2 people impersonating as lawyers, opened fired at him & killed him. Police responded & neutralized the two," Asthana said.

"No other injury to anyone be it judges or public...It's a sensational case, seems like this incident was executed with advanced planning. The case has been transferred to Crime Branch," he added.

Asthana said one of the attacker was from Baghpat while the other one was from Delhi. "Revolver and pistol recovered from them. We are examining CCTV footage to ascertain if anyone else (accused) was also involved," he added.