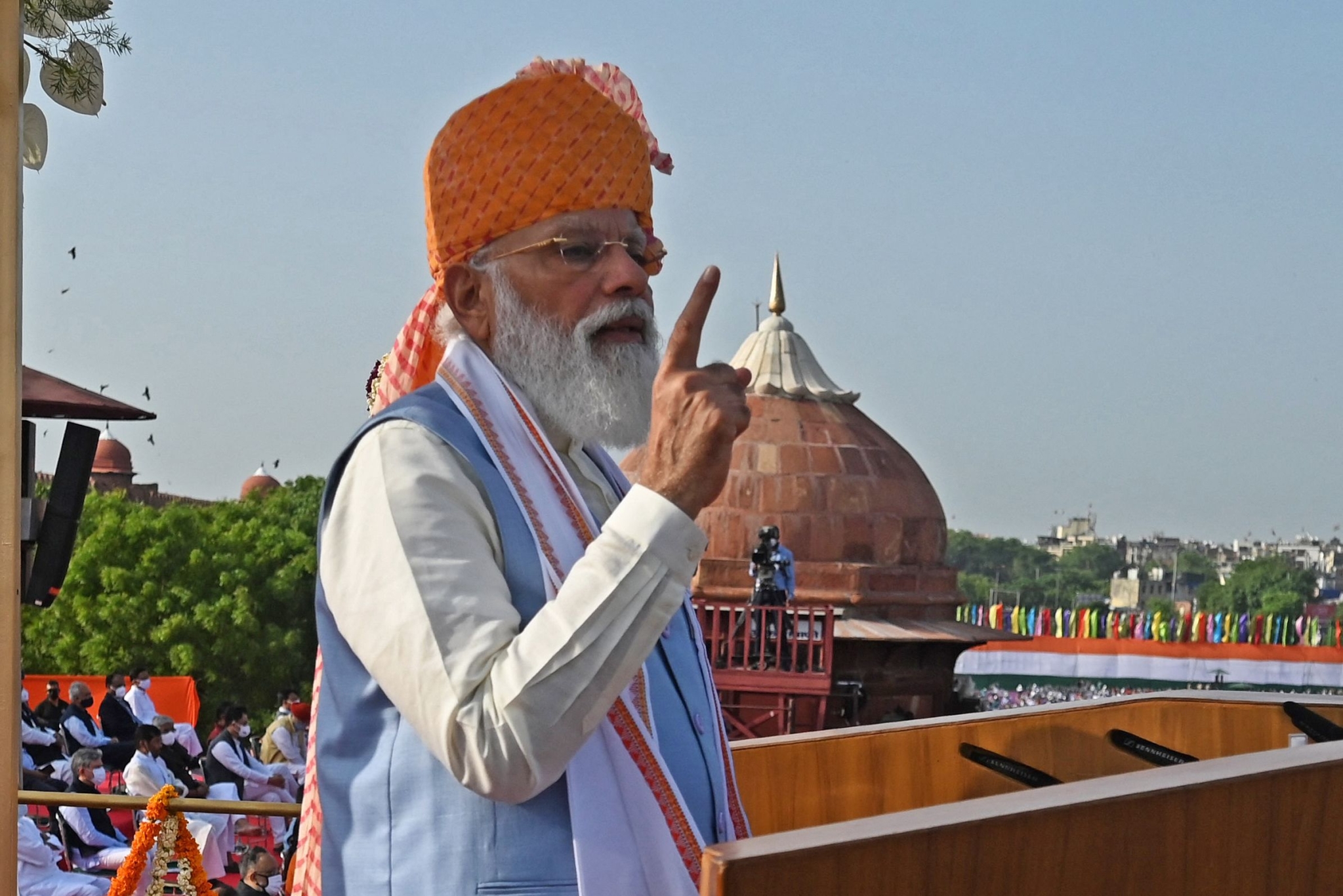 With an aim to make India a hub for the production and export of green hydrogen, Prime Minister Narendra Modi in his Independence Day speech on Sunday announced a National Hydrogen Mission for the country.

Delivering his Independence Day address from the ramparts of the Red Fort, he said India can achieve self-reliance in energy through a mix of a gas-based economy, doping sugarcane extracted ethanol in petrol and electric mobility.

India, he said, spends over Rs 12 lakh crore on energy imports every year. While India is 85 per cent dependent on imports for meeting its oil needs, overseas supplies make up for roughly half of the local requirement for natural gas.

"For India to progress, for Atmanirbhar Bharat, energy independence is necessary," he said. "India has to take a pledge that it will be energy independent by the year we celebrate 100th year of Independence." The roadmap for that is to increase usage of natural gas in the economy, setting up a network for supply of CNG and piped natural gas across the country, blending 20 per cent ethanol in petrol and electric mobility, he said.

The country has achieved the target of 100 gigawatts of renewable energy capacity ahead of the target, Modi added. "I announce National Hydrogen Mission," he said.

The target is to make India a global hub for production as well as export of green hydrogen. "Green hydrogen will give India a quantum jump in achieving its targets," he asserted.

He also noted that India's vehicle scrap policy is going to play an important role in this achieving environmental security. "Among G-20 economies, India is one of the few who are speeding towards their climate protection goals. Our vision of a plastic-free India can only be made true if we stop the use of single-use plastic completely," he added.

The National Hydrogen Mission was first announced in the Union Budget for 2021-22 in February this year.

Hydrogen is produced predominantly through Steam Methane Reforming, or SMR, which utilises fossils fuels, such as natural gas or coal, and through Proton Exchange Membrane Electrolysis, which splits water into hydrogen and oxygen using a current of electricity.

Currently, all hydrogen consumed in India comes from fossil fuels. By 2050, three-fourth of all hydrogen is projected to be green -- produced by renewable electricity and electrolysis.

Speaking at the 'Urja Sangam' conference in March 2015, Prime Minister Modi had set a target of cutting India's oil import dependence from 77 per cent in 2013-14, to 67 per cent by 2022. Import dependence has, however, only increased.

The government is now looking at substituting some oil by one that is produced from sugarcane and other bio-materials. It is looking to supply petrol mixed with 20 per cent ethanol by 2023-24, up from the current 8 per cent.

Also, the government is looking at raising the share of natural gas in the economy to 15 per cent by 2030 from the current 6.2 per cent.

On Sunday, Modi said the roadmap for making India self-reliant in energy is clear -- "promoting a gas-based economy, a pan-India network of CNG and piped natural gas and achieving 20 per cent ethanol blending target." "India has also moved towards electric mobility," he said.

Out of the target of setting up 450 gigawatts of electricity generation capacity from renewable sources by 2030, India has already achieved 100 GW ahead of schedule, he said.

In line with the government's focus on hydrogen, both private and public sector companies have announced ambitious hydrogen projects.

While Reliance Industries and Adani Group are pushing ahead with their plans to make hydrogen a part of their portfolio, the nation's biggest state-run refiner IOC has also unveiled hydrogen plans. Independence Day 2021: Here's all you need to know about 'Gati Shakti Plan' announced by PM Modi at...