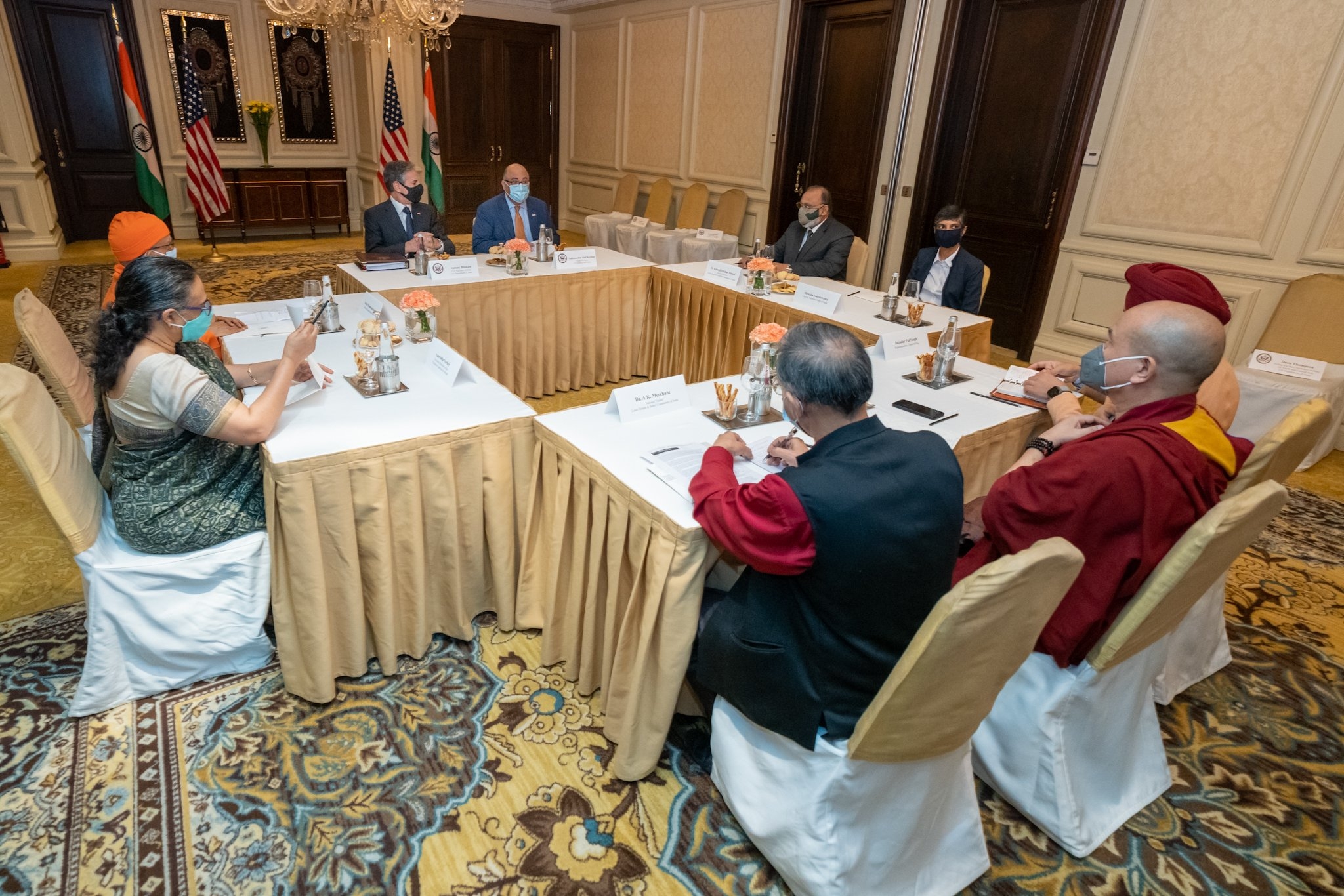 Setting the tone of his India visit with a big political message to China, US top diplomat Antony Blinken on Wednesday met Tibetan Buddhist monk Geshe Dorji Damdul, current director of Tibet House in Delhi. The former interpreter of Tibetan spiritual leader Dalai Lama, he was a part of a group of civil society leaders who met the US Secretary of State early in the day. Blinken is on a two-day visit to India.

Damdul is a director of Tibet House, which was founded in 1965 by the Dalai Lama to preserve and disseminate the unique cultural heritage of Tibet. The meet is expected to irk Beijing, which considers Tibet as an integral part of China. The meeting took place in the backdrop of strained Beijing and Washington ties.

"I was pleased to meet civil society leaders today. The US and India share a commitment to democratic values; this is part of the bedrock of our relationship and reflective of India's pluralistic society and history of harmony. Civil society helps advance these values," Blinken tweeted following the meeting.

Recently, US Deputy Secretary of State Wendy Sherman visited China to meet Chinese officials. She raised concerns about human rights violations in Tibet, Hong Kong and Eastern Turkestan. Last month, the US Senate had passed a bipartisan bill to heed the call to open a consulate in Lhasa and had called for reinforcing the global engagement on policy towards the reincarnation of His Holiness the Dalai Lama.

Last week, Chinese President Xi Jinping had underlined the importance of long-term stability and prosperity in Tibet during a meeting with top military officials in Lhasa. This came a day after he made a previously unannounced visit to the strategically important region, including to Nyingchi, a town close to the border with Arunachal Pradesh.

Since becoming President in 2013, Xi has pursued a firm policy of stepping up security control of Tibet. Beijing has been cracking down on Buddhist monks and followers of the Dalai Lama. The United States has been raising the issue of human rights violations in Tibet at various platforms.

Xi, also General Secretary of the ruling Communist Party of China (CPC) and Chairman of the Central Military Commission, met top officials of the Tibet Military Command of the People's Liberation Army, guarding China's border with India in Arunachal Pradesh, and also called for "fully strengthening the work of training soldiers and war preparation," the Global Times reported.

The Chinese leader made his first visit to Tibet as President from Wednesday to Friday. But his important visit was kept under wraps by China's official media till the end of the tour on Friday due to the sensitivities of the trip. It was the first time in recent years, a top Chinese leader visited the Tibetan border town. From there he went to the provincial capital Lhasa by the recently launched high-speed train.

Chinese troops occupied Tibet in 1950 and later annexed it. The 1959 Tibetan uprising saw violent clashes between Tibetan residents and Chinese forces. The 14th Dalai Lama fled to neighbouring India after the failed uprising against Chinese rule. The Dalai Lama, the supreme Tibetan Buddhist leader, established a government-in-exile in India. There are at present more than 10,000 Tibetans living in Dharamsala alone, and an estimated 160,000 Tibetan exiles around the world.