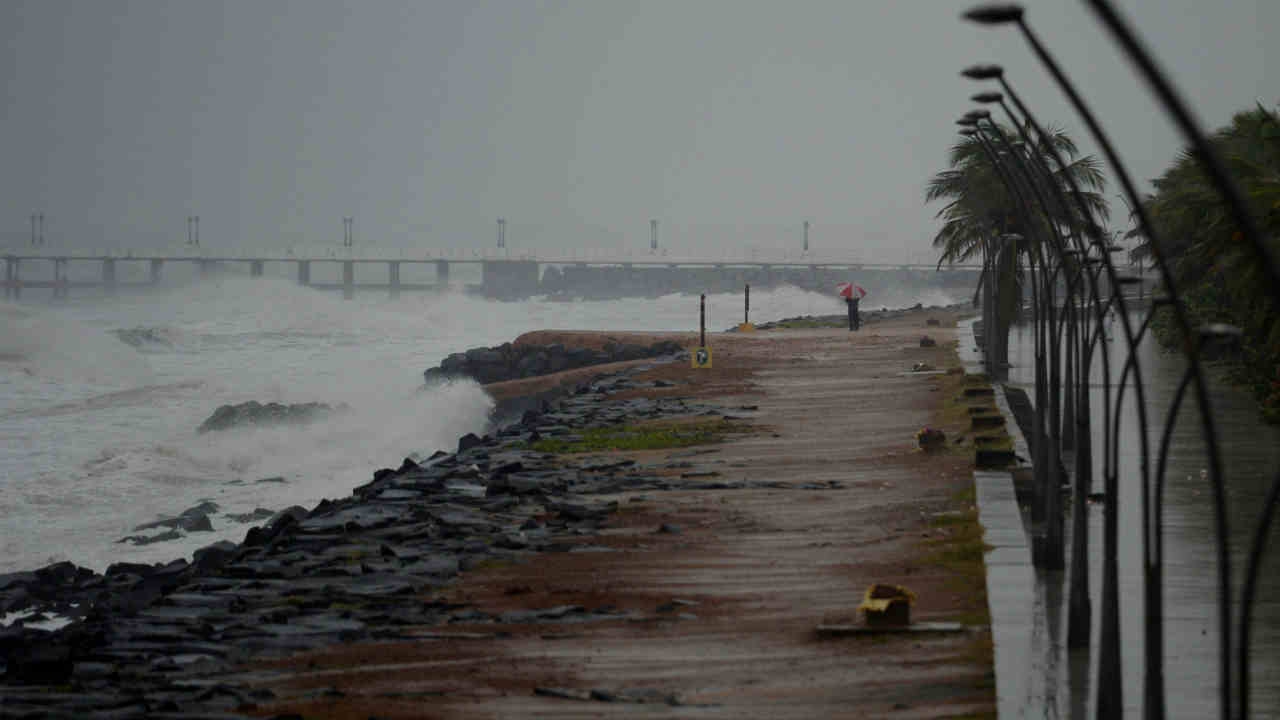 A man shelters under an umbrella from heavy rains while looking out to the Indian ocean as cyclone Nivar approaches the southeastern Indian coast in Puducherry on November 25, 2020 | AFP

While there has been no report of loss of lives, it brought heavy rains to the union territory and several districts of Tamil Nadu, IMD officials said. Nivar weakened into a severe cyclonic storm after it crossed coast near Puducherry, the IMD said.

Earlier, the IMD had said Nivar will cross coast near Puducherry with a wind speed of 120-130 kmph, gusting up to 145 kmph. The landfall of Nivar began late on Wednesday night.

"Very severe cyclonic Storm NIVAR: weakens into a Severe Cyclonic storm," it said in another tweet.

"The storm now lies inside the land area. There will, however, be rainfall and strong winds as well," he told PTI.

The Puducherry government too has announced Thursday as a public holiday.

Twenty five teams from National Disaster Response Force (NDRF) have been deployed on the coastal areas of Tamil Nadu, Puducherry and Andhra Pradesh.

In the next six hours, the severe cyclonic storm will further weaken.

According to the weather department the cyclone lays centered over coastal Tamil Nadu and Puducherry about 25km north of Puducherry with wind blowing at a speed of 90-100 kmph gusting to 110 kmph.

IMD said, "Under its influence rainfall at most/many places with heavy to very heavy fall at a few places with isolated extremely heavy falls are likely to occur over Ranipet, Tiruvannamalai, Tirupattur, Vellore districts of Tamil Nadu and Chittoor, Kurnool, Prakasam and Cuddappa districts of Andhra Pradesh.

No reports of loss of life or crop damage in TN

"There is no loss of lives due to the rains. People have given us full cooperation," he said.

Incidents of wall collapse were reported from a few places, he said.

"It's a solace that nothing untoward happened and the weakening of the cyclone is good news," he said.

The minister said about 2.5 lakh people were housed in cyclone shelters in Tamil Nadu as part of safety measures.

According to the inputs received so far, crops and groves are safe in the state, Udhayakumar told reporters.

However, the situation would be reviewed and based on its outcome, insurance payout and compensation to farmers, if any, would be announced by Chief Minister K Palaniswami, he said.

Cuddalore in Tamil Nadu recorded the highest rainfall at 24.6 cm, followed by 23.7 cm in Puducherry from 8.30 PM on Wednesday till 2.30 am on Thursday.

According to initial estimates, over 150 trees were uprooted in Tamil Nadu alone.

As the storm began crossing coast, the rainfall stopped briefly here. It returned with strong winds in some localities close to the city and the suburban shoreline.

The approach roads to the Marina beach, off the arterial Kamaraj Salai, were flooded and sheets of water reached close to the main road where the city's fishermen had securely tied up their boats.

As rains lashed Mamallapuram near here, troops of monkeys sought refuge under the decorative, cave-like arches, dotted with images of deities carved in stone at the ancient Sri Sthalasayana Perumal temple.

On its way the cyclone uprooted several trees and power lines in Tamil Nadu`s Cuddalore, Marakkanam and in Puducherry.

Power supply in several areas was disrupted. The concerned administration was removing the fallen trees.

In Puducherry also the power supply was disrupted.

Puducherry Chief Minister V.Narayanasamy told a news channel that power supply will be restored in a phased manner on Thursday itself.

He said, a lot of trees have fallen due to the cyclone and rain in continuing.

Narayanasamy said low lying areas were inundated and work was on to drain the water. Fallen trees were being removed. "Power supply was disrupted and it will be soon restored in a phased manner in 12 hours", he said.

As regards the cyclone damage to lives and property, Narayanasamy said the assessment will be made and by this afternoon, an estimate of damage will be known.

Narayanasamy said, "By Gods grace people of Puducherry escaped the fury of Nivar."

He also inspected the cyclone damaged areas and urged the people to stay indoors and fishermen not to venture into the seas.

In Tamil Nadu's Villupuram district, police said the fallen trees have been removed to ease the flow of traffic.

Similarly, the officials of power utility were also on the job to restore power supply wherever it got disrupted due to the cyclone.

At Marakkanam near Puducherry, several power poles fell down and the fishermen community requested the Tamil Nadu government to restore the power lines at the earliest.