CDS Bipin Rawat, wife Madhulika, 11 others killed in helicopter crash near Tamil Nadu's Coonoor: All you need to know 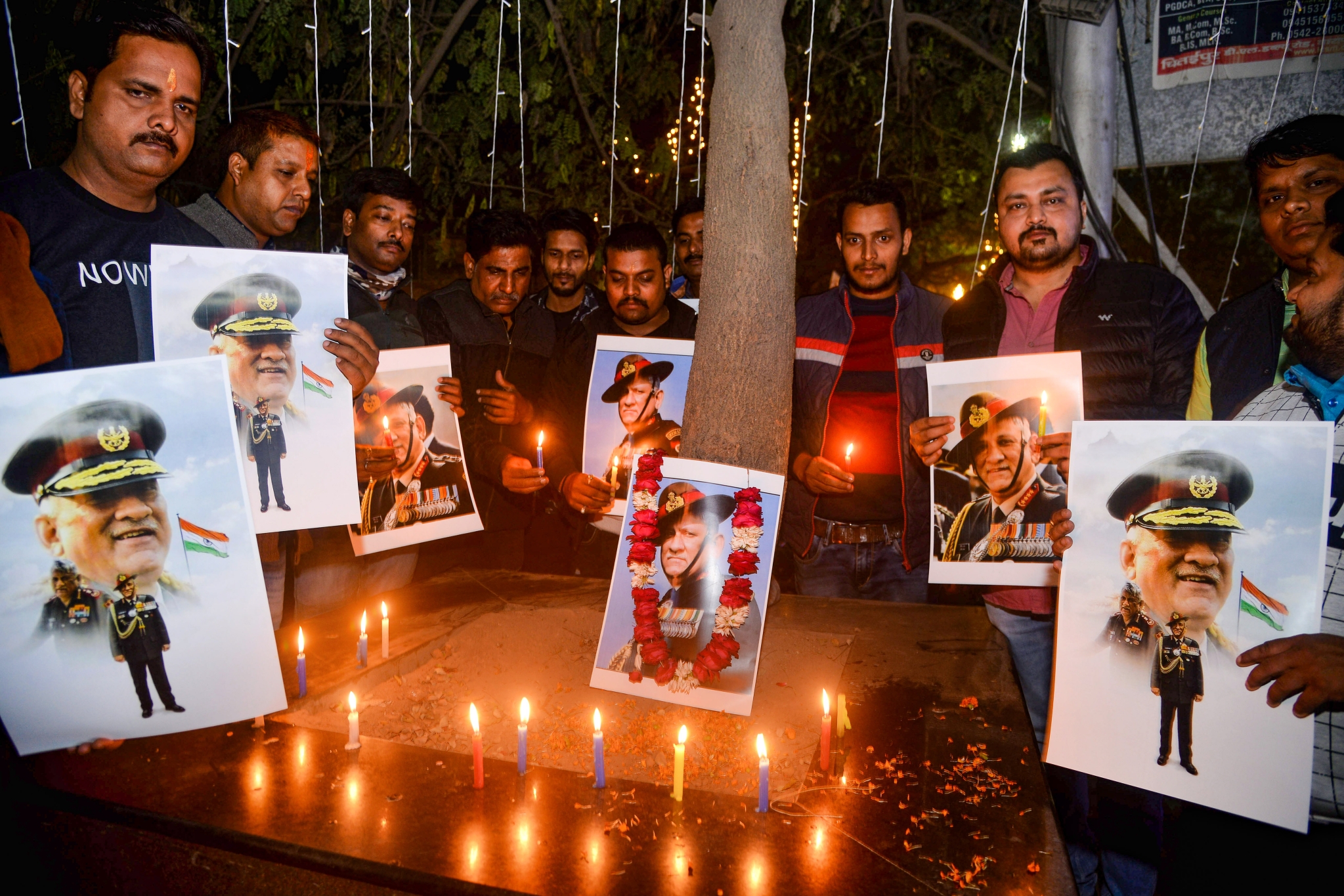 Varanasi: People pay homage to those killed in an IAF chopper crash, in Varanasi, Wednesday, Dec. 8, 2021. CDS Gen Bipin Rawat accompanied by his wife Madhulika Rawat, his staff and other officials were killed in an IAF Mi-17V5 helicopter crash in Coonoor, Tamil Nadu. | (PTI Photo)

Only one IAF officer survived and is undergoing medical treatment.

The chopper was just 10 km away from its destination – the Wellington Defence Services Staff College (DSSC), where General Rawat was to address the faculty and student officers of the Staff Court, when it crashed and turned into a fireball around 12.25 pm.

Nearly six hours after the tragic accident, the Indian Air Force Media Coordination Centre confirmed that the top officer was no more.

“With deep regret, it has been ascertained that Gen Bipin Rawat, Mrs Madhulika Rawat and 11 other persons on board have died in the unfortunate accident,” the IAF MCC tweeted at 6.03 pm.

Group Captain Varun Singh, Directing Staff at DSSC, who sustained injuries, is admitted at the Military Hospital in Wellington.

Eyewitnesses said they came out of their homes in Kattery near Coonoor on hearing loud sounds of helicopter blades whirring and saw the chopper crash into a tree before it was engulfed in flames.

Defence personnel along with uniformed men from the Tamil Nadu police and fire and rescue services departments arrived to undertake rescue operations with locals joining the efforts to douse the flames. While four passengers were initially rescued from the accident, three of them succumbed at the hospital. The bodies of the rest were retrieved in a charred condition from the spot.

Tamil Nadu Chief Minister M K Stalin expressed deep shock and rushed to the Nilgiris in the evening. Before the news of the death of the defence officers came in, the State had rushed medical teams from nearby Coimbatore and put hospitals in the district on standby, just in case the injured had to be flown in for advanced treatment.

Director General of Police Sylendra Babu too rushed to Nilgiris.

According to Defence sources, General Rawat, his wife and his personal security officers had arrived at the IAF Sulur air base in an Embraer aircraft at around 11.35 am. After a brief halt, they boarded the ill-fated helicopter and headed to Wellington before the chopper crashed.

Tamil Nadu Government officials said the logistics relating to the shifting of the mortal remains of the top officers would be decided by the Army.

The IAF has ordered an inquiry headed by an Air Marshal to ascertain the cause of the accident.

The crash has baffled experts and the black box will possibly offer a clue to the mishap.

The official said nonetheless a technical snag or weather could have been a factor.