HC declares pandals containment zones; only listed organisers will be allowed
Our Correspondent 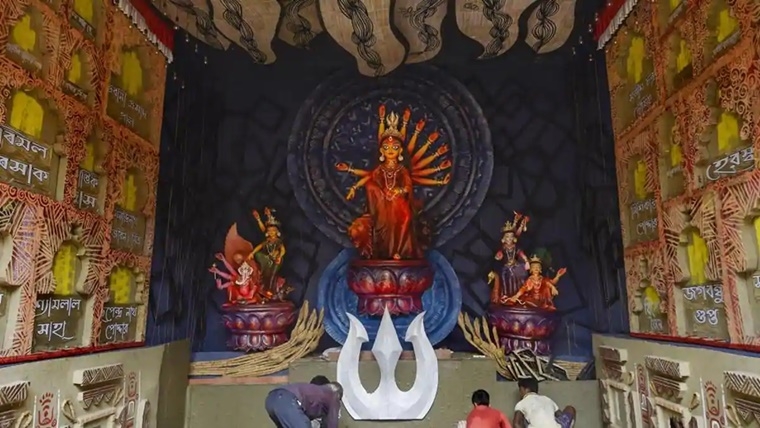 Kolkata: Three days before West Bengal ushers in the festival of Durga Puja amidst the COVID-19 pandemic, the Calcutta High Court on Monday declared all ‘pandals’ as containment zones, where no visitors will be allowed.

To facilitate the same, barricades will be put up by puja organizers at the entrance. The High Court order was in response to a PIL filed by one Ajay Kumar.

Only organizers are allowed inside ‘puja pandals’ and a list of 25 such admissible functionaries will have to be drawn up in advance.

Smaller ‘pandals’ will be allowed to accommodate 15 persons. A board inscribed with the permissible names will be hung outside the pandals. However, this number has to be fixed and cannot vary from one day to another. Visitors will have to stay at a distance of 5 metres from the small pandals and 10 metres from the big ones.

The high court observed it was disappointing that the State has not come up with a plan to implement the guidelines issued by them. The court was told that the State tried its best to lay down the norms but these could not be implemented due to the limited police force; also, managing around six lakh people on the road who would be hopping from pandal to pandal was not possible.

The High Court order read, “The virus refuses to go away. Though the healthcare facilities in the State have been augmented, with the limited resources available, the State can only do so much. In such a situation, it may be judicious to err on the side of prevention than to allow the festivities to go on without any checks and repent later that adequate resources were not available to provide for the massive cure that may become necessary.”

The court order further states, “When students across disciplines, whether in schools or colleges, or engaged in higher studies, have been prevented from attending their institutions for more than six months and several students stand to lose a year, it is rather incongruous that puja festivities would continue as in the previous years.”

The police personnel are to ensure that the High Court order is adhered to and the court has asked the Director General of Police (DGP) and the Commissioner of Police to report to the court within four days of Laxmi Puja by November 5.

In addition, the court has asked each puja committee to submit a blueprint of crowd management. There are over 37,000 puja committees in West Bengal, including 3000 in Kolkata.

Trinamool Congress (TMC) MP Sougata Roy said he is saddened at the High court order and that this will result in problems for puja organizers. "It is a setback for Puja organisers... we will wait for the government to speak."