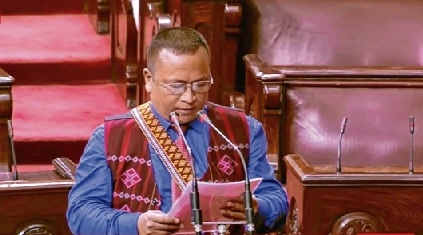 The Assam Police on Friday summoned Mizoram’s lone Rajya Sabha MP K Vanlalvena (in pic) on August 1 for questioning over his alleged “threatening statement” in connection with the Monday violence along the interstate border, and pasted a notice at his Delhi residence.

The Assam Police also said it would take “lawful action” against Vanlalvena who had allegedly made a “threatening” statement over the border clash in which 5 cops and a civilian were killed.

Sources said a team of Assam Police CID, which has arrived in Delhi, visited Vanlalvena’s residence and the Mizoram House looking for him without any success. Vanlalvena is believed to be avoiding the team. The MP was not available for comments.

Since the Resident Commissioner of Mizoram reportedly refused to receive any notice served on Vanlalvena to join the Assam Police investigation, the CID team pasted the notice on his residence. “It has come to light that you have given a threatening statement in media targetting civil and police officials in connection with the incident which is a subject matter of investigation.

“Therefore, there are reasonable grounds to question you to ascertain facts and circumstances from you,” the Assam Police notice read.

The Mizoram MP has been asked to appear before the Officer-In-Charge of the Dholai police station in Assam’s Cachar district at 11 am on August 1 “without fail”.

Mizo Zirlai Pawl, a Mizo student body, accused the Assam government of “threatening” Vanlalvena, a former president of the outfit.

“He has been conspired, blamed and charged against different criminal cases in connection with the Assam-Mizoram border conflict. Any problem should not happen to him. This is also information to Himanta Biswa Sarma, the CM of Assam,” the MZP said in a statement.

Meghalaya Lok Sabha MP Vincent H Pala on Friday wrote to PM Modi, stating interstate boundary clashes have not just been on the rise of late, but have taken an aggressive turn under the newly sworn-in BJP government in Assam.

Provocations and aggressive posturing at the interstate borders is perilous to healthy neighbourly relations, Pala maintained.

“For reasons best known to the present BJP-led government of Assam, such conflicts have not only been on the rise, but have also taken a much more aggressive turn,” Pala, a 3-time Lok Sabha MP from Shillong, said in a letter to PM Modi.

Seeking the PM’s intervention for establishing cordial relations between the neighbouring states, the former Union minister of state said, “I sincerely urge you to address this issue at the earliest. The progress of the region has long been fought for... and it would be a matter of great regret to let that wither away.” He said the recent clashes along the Assam-Mizoram border has again highlighted the vulnerability of peace and stability of the region.

The situation on the Assam-Mizoram border remained tense but calm as CRPF troops have started patrolling National Highway 306 between the states, in strength. Officials in Assam’s Barak valley said organised blockade on Assam’s roads leading to Mizoram was lifted and no group was out on the streets trying to stop truckers or other vehicles. After a clash on Monday between Assam and Mizoram police forces on a disputed border forest tract, various group's in the Barak Valley had announced a blockade of Mizoram, drawing sharp protests from the neighbouring state. However, "palpable fear of entering an area which was like a war zone is holding back trucks . Most truckers have stopped their vehicles in Dholai village near the border with Mizoram,” said officials. A long line of trucks on the highway now marks the entry point to Dholai’s bazaar. Land-locked Mizoram has been getting its supplies via Tripura during this week as tension and unrest held up its normal supply route through Assam.