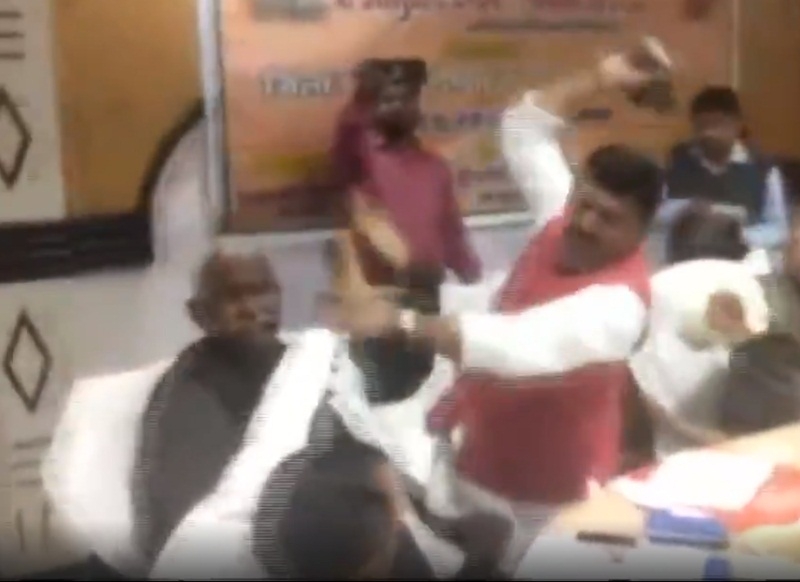 Lucknow: It was hand to hand combat at a foundation laying ceremony in Sant Kabir Nagar with a BJP MP and an MLA exchanging blows, much to the amusement of the public. The spat was over the omission of a name on the foundation stone.

Several videos of the scuffle shot by onlookers have gone viral which show BJP MP Sharad Tripathi throwing a tantrum and projecting his anger at party colleague and MLA Rakesh Singh because his name was missing from the foundation stone for a local road.

The MLA responded by saying that it was his decision. A verbal exchange ensued and while the MLA was sitting with other party members at a round table, the MP removed his shoe and started battering him with it.

Livid at the MP’s actions, the MLA got up and hit back. The two were thereafter raining blows on each other before party members prised them apart. Soon after the ‘shoe shower’ ended, the ministers left the meeting and returned to Lucknow.

Both the parliamentarian and the MLA have not responded to media queries. UP BJP chief MN Pandey said the party has taken cognizance of this “condemnable incident” and both have been summoned to Lucknow. “Strict disciplinary action will be taken,” he said.