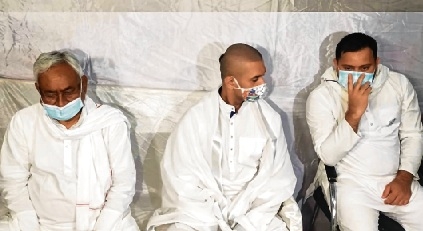 LJP President Chirag Paswan continued to keep Chief Minister Nitish Kumar in suspense over his ties with the BJP.

On Tuesday, Chirag claimed that his party has fielded five candidates in consultation with top BJP leaders. However, the BJP state leadership is repeatedly claiming that the party has no ties with LJP.

LJP has fielded rebel BJP candidates as its candidates.

BJP national president JP Nadda, who addressed two election meetings at Ara and Buxar on Tuesday, also did not clarify the stand of his party on LJP.

Interestingly, Chirag tweeted and appealed to his supporters to listen to the PM's address to the nation by observing social distancing. In another, he predicted that the LJP would get more seats than the JD-U.

The LJP President declared that he would oppose any suggestion of BJP to re-elect Nitish Kumar as leader of the legislature party next month. If the BJP insisted on Nitish, he would announce his exit from the NDA as people of Bihar do not want Nitish as their CM again. “If BJP is keen on retaining Nitish, he should be made an Union minister, but not the CM,” he said. He claimed the much publicised 7 resolves of Nitish Kumar have failed.