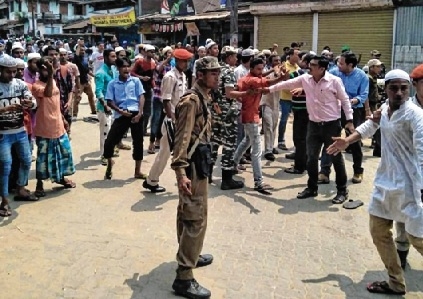 Three weeks after a violent clash between police forces of Assam and Mizoram, a firing incident on Tuesday escalated tension on the disputed interstate border again.

While Mizoram alleged personnel of the Assam Police fired on its civilians injuring one, the neighbouring state claimed the men in uniform only returned the fire after miscreants from the other side of the border sprayed bullets on them. 7 people including 6 Assam cops were killed and over 50 injured in the clash between forces of the two North-eastern states on July 26 and a process of rapprochement is on.

Mizoram’s Kolasib district Deputy Commissioner H Lalthlangliana told PTI Tuesday’s incident occurred at 2am at the disputed Aitlang area bordering Assam’s Hailakandi district when three residents of Vairengte town went there to collect meat from a friend, a resident of Bilaipur in Assam, who invited them to come.

One person was injured in the firing by Assam cops, guarding the interstate border, he claimed.

Hailakandi SP Gaurav Upadhyay said an exchange of firing took place but declined to share details. “No casualty has been reported on both sides,” he said.

A senior district official told PTI miscreants from the Mizoram side showered bullets in darkness from the top of Darasing Hills when workers were constructing a road leading to the border from Bilaipur under MGNREGA. “In reply to the firing from the Mizoram side, Assam Police personnel also fired seve­ral rounds,” the official said.

Hailakandi: An indefinite curfew was clamped in Serispore Tea Garden and its nearby areas in Hailakandi district of Assam following a clash between two groups over an accident, an official said on Tuesday. Six people were arrested for their alleged role in violence and vandalism in the area on Monday night, Hailakandi District Magistrate Rohan Jha said.

Jha imposed “total curfew” in Serispore Tea Garden and 3 nearby villages — Narainpur Pt-II, Itarkandi Pt-I and Chandpur — with effect from 10pm on Monday night. “The situation is peaceful now and no untoward situation was reported from anywhere. Police and paramilitary forces are patrolling in the area,” the district magistrate told PTI. The scuffle reportedly started in front of a temple after a collision between an auto and e-rickshaw on Monday.

Shillong calm after unrest, helpline for evacuation: The Megha­la­ya govt on Tuesday said there were no untoward incidents since cur­few was clamped in Meghalaya capital following unrest, and laun­c­h­ed a police helpline for people in need of evacuation.

Kohima: The predecessor govt at the Centre had kept the Naga ne­g­o­tiations lingering but PM Modi is eager to resolve the vexed Na­ga political issue (NPI) and begin the Framework Agreement, Union MoS for Ex­t­e­r­nal Affairs and Ed­u­cation Rajku­mar Ranjan Singh said on Tues­day. Singh was on a maiden vi­sit to Nagaland as part a of the ‘Jan Ashirwad Yatra’ ini­tiated by PM for new ministers.