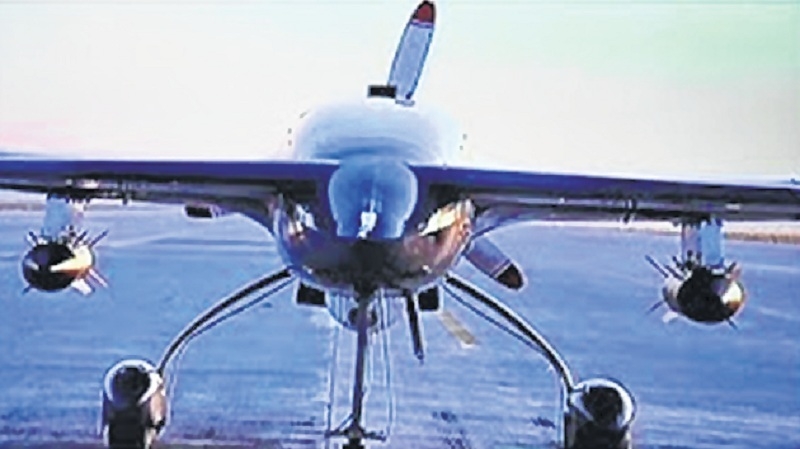 Amritsar: Revelations by arrested militants of the Khalistan Zindabad Force led to recovery of a China-made drone, the second one that was used to airdrop arms and ammunition from Pakistan into India's Punjab, from a village close to the border in Amritsar district on Friday, officials said.

A team of the state's counter-intelligence wing took militants Akashdeep Singh and Shubhdeep Singh to Mahawa village in Amritsar district, where they had hidden the drone in bushes.

Shubhdeep Singh was arrested a day earlier. He was the seventh person arrested in the case.

During interrogation, the militants revealed that four drones that were used to airdrop the weapons were hidden in the border Tarn Taran district.

The police are still trying to ascertain whether the recovered drone is among the four, whose presence was revealed by the militants during the interrogation.

Earlier, police had recovered a drone, the last one, that crashed in the Indian territory and found it fitted with high-end technology and GPS.

A massive combing operation in border areas by the counter-intelligence wing is on to trace the remaining three drones, a senior police official told IANS here.

The Indian Army and the Border Security Force have also sounded an all-out alert along the international border after reports of the drones.

China-made drones, capable of carrying a 10 kg payload each, made at least eight sorties this month to drop weapons, counterfeit currency and communications equipment across the heavily-guarded border in once-militant hotbed Punjab, an intelligence official said.

The weapons belonged to Pakistan-based Khalistani terror groups. The sorties, first of their kind in the state, were made between September 9 and 16, the official associated the counter-intelligence wing, which is investigating the incident, told IANS.

Cracking down subsequently, the police this week busted a module of the revived Khalistan Zindabad Force, the Pakistan-backed, Germany-based militant group that was conspiring to unleash a series of terrorist strikes in Punjab and adjoining states, especially Jammu and Kashmir, in Tarn Taran district. A cache of arms was also seized.

Terrorist Akashdeep Singh, who has been arrested in this connection, has confessed that he was in touch with Pakistan-based terrorist Ranjeet Singh Neeta on the arms drops, said the official, requesting anonymity.

Director General of Police Dinkar Gupta had told reporters that the weapons were suspected to have been delivered by drones launched by the Inter-Services Intelligence (ISI), and state-sponsored jihadi and pro-Khalistani terrorist outfits working under its command.

He said the purpose seems to have been scaling up terrorism and militancy in Jammu and Kashmir, Punjab and the Indian hinterland, in the wake of the recent developments in the Kashmir Valley.

He said the police operation was based on different inputs gathered from sources that activists of the banned KZF planned to carry out multiple terrorist strikes in Jammu and Kashmir, Punjab and other states.

In an operation carried out by Assistant Inspector General, Counter Intelligence, Ketan Baliram Patil, along with various Punjab Police teams based in Chandigarh, four module members were arrested and arms, ammunition, explosives and communication devices seized.

Gupta said the module was backed by the Pakistan-based KZF chief Neeta, and his Germany-based associate Gurmeet Singh, who had re-organised their outfit to revive terrorism in Punjab.

With the help of local sleeper cells, they had spotted, radicalised and recruited local members, besides arranging funds and sophisticated weapons from across the border for operationalising their modules.