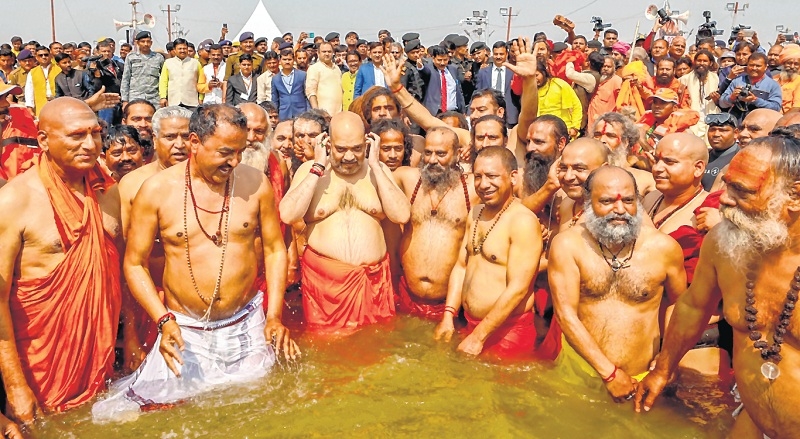 Prayagraj: The Bharatiya Janata Party (BJP) President Amit Shah on Wednesday took a dip in the Sangam – the holy confluence of rivers Ganga, Yamuna and Sarawasti – at Kumbhnagar in Prayagraj. Accompanied by Uttar Pradesh Chief Minister Yogi Adityanath and a number of saints, the BJP chief, wrapped till his waist in a saffron robe, offered prayers to the holy rivers.

Shah later also performed an ‘aarti’ and went to a fabled Hanuman temple nearby before visiting the Akbar Fort where he offered prayers at the Saraswati Koop and Akshayavat tree. He later interacted with a group of saints at Sector 20 of Kumbhnagar, listening to their demands for an early start to the construction of the Ram temple in Ayodhya.

During the visit, Shah also praised the efforts of the Uttar Pradesh government to ensure that the water in the Ganga was clean and flowing. Deputy Chief Minister Keshav Prasad Maurya and BJP’s Organisational Secretary Ram Lal also accompanied Shah.