The helicopters are designed for hunting submarines, knocking out ships and conducting search-and-rescue operations at sea.
PTI 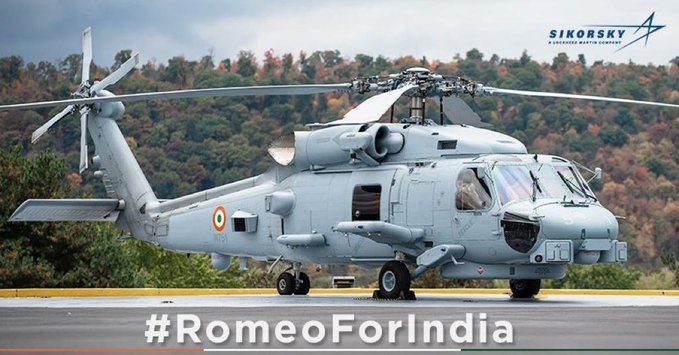 New Delhi: On the occasion of Navy Day, American firm Lockheed Martin on Friday shared the first picture of the MH-60 Romeo multirole helicopter for the Indian Navy in Indian tricolour.

India has placed orders for 24 of these helicopters under a government to government deal with US.

The helicopters are designed for hunting submarines, knocking out ships and conducting search-and-rescue operations at sea. The Lockheed Martin-built helicopters would replace India's ageing fleet of British-made Sea King helicopters.

During US president Donald Trump's visit to India in February this year, India and the United States further strengthened their defence cooperation, with the two countries giving a nod to an agreement under which India will get USD 3 billion of advanced military equipment including Apache and MH-60 Romeo helicopters.

Every year, December 4 is celebrated as the Navy Day to commemorate the decisive naval action by the Indian Naval ships on Karachi Port, which heralded the victory of India over Pakistan in the Indo-Pak War of 1971.