All country’s land is with our security forces: ITBP and BSF DG 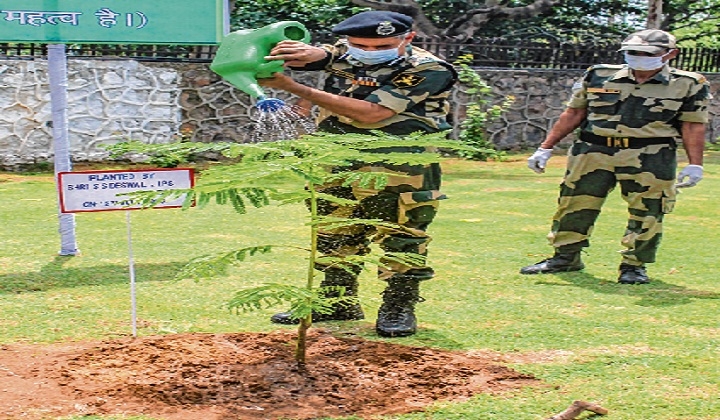 As Chinese and Indian troops move to disengage in eastern Ladakh after a tense standoff, the chief of ITBP and BSF on Sunday said all the country's land is under "full possession" of our security and defence forces.

SS Deswal, Director General of the Indo-Tibetan Border Police (ITBP) and the Border Security Force (BSF), was speaking to reporters on the sidelines of a plantation drive held at a BSF camp in Bhondsi. "All the country's land is with us. Our land is in full possession of our security forces," Deswal told reporters here.

He made the remarks when asked to comment on the current military standoff along the Line of Actual Control (LAC) in eastern Ladakh. "All our borders are safe, be it the eastern, western or northern. The security forc­es of the country are very active, capable and dedicated.

"They are capable to protect the borders against any kind of enemy with all their might and efficiency," the 1984-batch Indian Police Service (IPS) said.

All the security arrangements are in place at the borders and we can say that the country's security is ensured, he said. Deswal is the head of the ITBP and has been holding an additional charge of the BSF for over four months now.

Meanwhile, Deswal said transgenders should be given a chance to join security forces. “Transgenders are also human. They should also get employment opportunities to live a respectful life. It would be a good decision,” Deswal told ANI when asked about the Ministry of Home Affairs (MHA) asking CRPF, ITBP, SSB and CISF to examine the issue of incorporating 'transgender' as the Third gender in rules of CAPF (AC) Exam 2020.

Amid the ongoing dispute with China over boundary issue, the Indian Army is going to place another order of 72,000 Sig 716 assault rifles from the US.

The order for the second batch of the assault rifles would be coming after the first lot of 72,000 rifles, has already been delivered to the Army for use by troops in Northern Command and other operational areas.

"We are going to place an order for 72,000 more of these rifles under the financial powers granted to the armed forces," Defence sources told ANI.

The Indian Army had received the first lot of Sig Sauer assault rifles to boost its counter-terrorism operations. India had acquired the rifles under the fast-track procurement (FTP) programme.

The new rifles will replace the existing Indian Small Arms System (Insas) 5.56x45mm rifles used by the forces and manufactured locally by the Ordnance Factories Board.

As per the plan, around 1.5 lakh imported rifles were to be used by the troops in the counter-terrorism operations and frontline duties on the Line of Control (LoC), the remaining forces would be provided with the AK-203 rifles, which are to be produced jointly by India and Russia at Amethi ordnance factory. The work on the project is yet to start due to several procedural issues faced by the two sides.