Hari Om (30), wanted in at least four cases of robbery and dishonestly receiving stolen property, was shot in the leg.
PTI 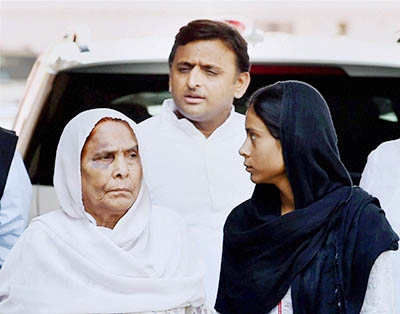 Noida: An accused in the 2015 lynching of Dadri's Mohammad Akhlaq was arrested following an exchange of fire with police in Greater Noida early on Monday, officials said.

Hari Om (30), who was wanted in at least four cases of robbery and dishonestly receiving stolen property in Ghaziabad, was shot in the leg, said police.

He, along with other accused, was out on bail in the Akhlaq lynching case. Hari Om was held from near Samana Canal by a team from the Jarcha police station, which had got a tip-off about a criminal's suspected movement in the area around midnight, the officials said.

"When the police team reached the spot, Hari Om started his motorcycle and tried to flee. When asked by police to stop for inquiry, he opened fire, inviting retaliatory action," a police spokesperson said.

"The accused, a resident of Bisahda village, got a bullet injury in his leg and was soon held by the team. He was then taken to a hospital for treatment," the official said.

An illegal firearm, along with ammunition, was seized from him, police said, adding that his motorcycle had been impounded.

A fresh case under the Arms Act and Section 307 (attempt to murder) of the Indian Penal Code has been registered against him at the Jarcha police station.

Hari Om is one of the 18 men accused of killing 52-year-old Mohammad Akhlak at Bisahada village in September 2015 over suspicion that he had stored beef in his house.

All accused in the case are currently out on bail and some of them had even attended a pre-Lok Sabha election event addressed by Uttar Pradesh Chief Minister Yogi Adityanath at Bisahda village in March this year.