All set for Nov 10 as Bihar awaits poll results
Agencies 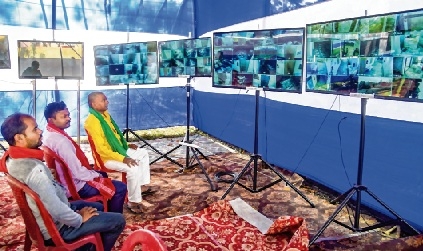 Patna: The Election Commission has made elaborate arrangements for counting of votes on November 10 for the Bihar assembly poll as the state awaits results of a closely-fought election. The poll panel said it has set up a total of 55 counting centres, housing 414 halls, in all the 38 districts of the state that voted in 3 phases on October 28, Nov 3 and Nov 7.

The maximum 3 counting centres each have been set up in 4 districts of East Champaran (which has 12 assembly constituencies), Gaya (10 constituencies), Siwan (8) and Begusarai (7). Rest other districts either have 1 or 2 counting centres each. Considering the fact coronavirus is raging in the state, steps have been taken to ensure Covid guidelines are strictly followed during the counting. Face masks will be mandatory for entering into the counting centres besides sanitisers will be kept in adequate quantity there.

In Patna, votes for all the 14 assembly constituencies will be counted at just 1 centre set up at AN College. The poll panel said it is readying 30 counting halls at the college.

The inner core is being guarded by the Central Armed Police Forces (CAPFs), then there is the Bihar Military Police (BMP) and then the district police, he told reporters. "We have deployed 19 companies of CAPF just for the security of the strong rooms and counting centres. Besides, we have 59 CAPF companies to ensure law and order during and in the aftermath of the counting process," he said.

The CEO said the EC will strictly deal with any "anti-social" elements who indulges in "hooliganism" during or in the aftermath of the counting. Additional DGP (Headquarters) Jitendra Kumar said CCTV cameras have been installed in the control rooms. "Their display is in the district election officers offices. And they are being monitored regularly by the CEO,” he said.

With exit polls predicting victory for the RJD-led Grand Alliance, the party on Sunday wa­r­n­ed its workers against indulging in celebratory firing and “uncivil behaviour” towards rivals on the day of counting of votes on Nov 10, irrespective of the results. In a tweet addressed to its workers, the RJD said, “Whatever the election results are on November 10, it has to be accepted with absolute restraint, simplicity and courtesy. Improper fireworks, ce­l­ebratory firing and uncivil beha­viour towards our rivals or their supporters will not be accepted at any cost.” On Nov 9, RJD’s CM candidate Tejashwi celebrates his 32nd birthday. The instructions to behave decently on the counting day is part of his efforts to do away with “rowdy behaviour” on such occasions in the past and establish a new culture.