"A contact has been established with the hiding terrorists. We believe 2-3 terrorists are trapped," a police officer in south Kashmir said.
FPJ Web Desk 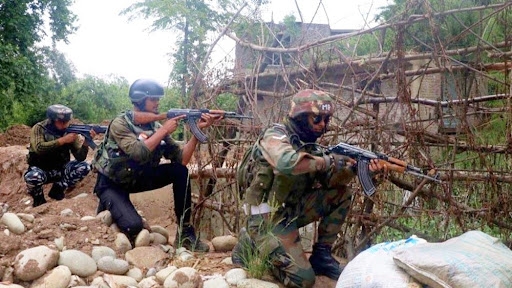 An encounter broke out between security forces and militants in the Pombai and Gopalpora village areas of Kulgam district in the south of Kashmir.

"A contact has been established with the hiding terrorists. We believe 2-3 terrorists are trapped," a police officer in south Kashmir said.

According to the reports, a joint team of Police, Army, and CRPF launched a cordon and search operation in Pombai where the unknown militants fired upon the soldiers resulting in a gunfight.

According to an update shared by the Kashmir Zone Police Twitter handle, the commander of proscribed terror outfit TRF Afaq Sikander has been killed in the Gopalpora encounter. The Resistance Front or TRF incidentally is an offshoot of the Lashkar-e-Taiba (LeT) terror group.

In the meantime, the Pulwama police and SFs arrested two LeT terrorist-associates named Amir Bashir and Mukhtar Bhat during a joint naka checking exercise. "IEDs were recovered from their possession. Investigation in progress," read a tweeted update from the IGP Kashmir.