To determine the health of the economy, regular data collection is critical. Private institutions like the Centre for Monitoring Indian Economy (CMIE) have taken upon themselves the responsibility to provide economic data and interpretation, which is immensely useful. Especially when this is not easily forthcoming from the government. While CMIE provides information across various parameters of the economy, there is one specific segment that gets the attention of the general public. That is the data around employment and the state of the economy.

In order to understand the state of the overall economy beyond employment numbers, The Free Press Journal in association with SIES College organised a webinar. At the session, Mahesh Vyas, Managing Director and CEO of CMIE discussed with RN Bhaskar, Consulting Editor, FPJ the state of the Indian economy.

The state of the Indian economy

The economy is in a recovery phase. India had a traumatic and terrible FY 2021— when the economy shrank by 6-7 per cent. It was an extremely bad year in terms of growth and many other parameters. The year was dominated by the fear of infectious COVID-19 spreading and death stalking us. Despite all this, we are seeing a clinical recovery.

The growth rate forecast for the current year as per Reserve Bank of India’s (RBI) professional forecasters is of the order of 10 per cent. Collectively, all professional forecasters of the country (CMIE among the other forecasters) are saying that India went down by 6-7 per cent last financial year. However, we will go up by 9-10 per cent in the current year. I find this odd. This means that you can fall one year and stand up the next year as if nothing happened.

This also means that all MSMEs that shrank will come back to life. All those households that saw job losses, the decline in income and savings depleted will now see them spring back in the current year and spend money.

The simple economics is that unless the government of India doesn't spend money the economy cannot repair itself. If the household is damaged and they are not ready to spend then the corporate and business sector are not going to invest. If the household and business sectors are unwilling to take the first step forward, then it is a no brainer that the government needs to take that. But the government of the day is extremely reluctant to go ahead with any additional spending. Therefore, there is nothing that will spurt us out of the situation. Thus, I question the professional forecasters when they say we will spring back to 9-10 per cent growth. This shows denial of the condition we are in.

In June 2020, the RBI’s professional forecasters were in denial that we will witness a calamity in front of us. Even though we had already seen the impact.

We are not in a good situation as our economy has shrunk. We are a poorer country but we are in denial that we are in a difficult condition. We are not willing to see the writing on the wall. If the government does not act and increase spending then we can be in a more serious problem unnecessarily.

CMIE is the first private company to measure unemployment in the country as a whole. It is normally always done by the country. But I am happy that CMIE is doing it [as well].

For a country like India, the employment rate is not the most important indicator. The unemployment rate shot up very sharply to around 24 per cent when the COVID shock happened. But it dropped very sharply after that. This is mainly because, in India, people cannot afford to remain unemployed for too long. So, when the country was shut down due to a lockdown, many people were forced to declare themselves as unemployed as they could not actually go to work. Therefore, our employment rate shot up.

When the lockdown restrictions were lifted, people went back to work. In April 2021, we again saw the rise in unemployment during the second wave of pandemic. This is not a worrisome factor as unemployment tends to go up and then it comes down. However, the worrisome factor is the declining labour participation rate (LPR) which declined even before COVID. But after the COVID shock, the rate at which the LPR is falling has to be looked at too.

There is a decline in the number of people offering jobs and it has declined even further after the shock.

This shows that the jobs available in the country are so scarce and inadequate that people are discouraged from looking for work. This is a measure that is more important for India rather than unemployment. This is also an indication of women not coming to work. And women are increasingly stepping away from the labour market. This is because the labour market is extremely harsh and disadvantaged for them.

Today, women are stepping away from work and younger people are extending their education as they feel there are no jobs.

Before COVID, the LPR ratio was around 43 per cent. But now it is down by 40 per cent.

The employment rate is in proportion to the working-age population that is actually employed. That number is just 36 per cent (15 years of age and more who are employed). This is terrible as the average for the world is more than 55-56 per cent. In the case of India, we are at 36 per cent. This shows where our employment problem stands. It is extremely bad in terms of the number of people who are engaged fruitfully in the economy (a lot of them are in agriculture). Fortunately, India’s extended family has protected them during such harsh times. 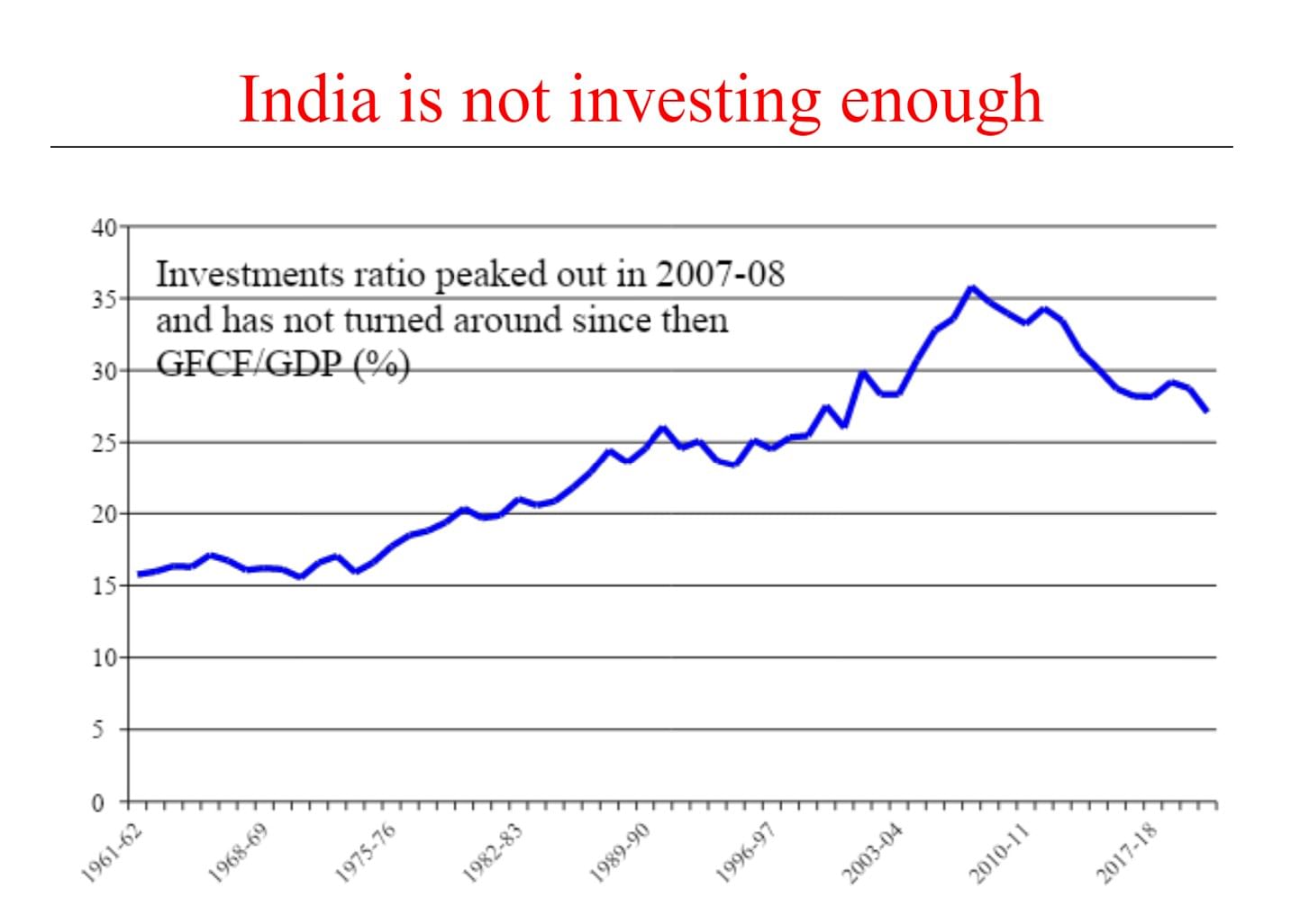 In the case of net fixed assets, the investments of Indian companies (25,000 companies) spiked in 1991 post liberalisation. These investments continued for a very long time. Then at the turn of the century, there was a slowdown from 1997 to 2002. In 2004-2005, the investments from the corporate sector picked up. It dropped again in 2012-2013 or so. The business cycle shows that there were smaller peaks and sharper drops.

Even if you look at a country's balance sheet or companies’ balance sheet, they all show that investment is on a decline. There is an enthusiasm level among companies about investments, but the reality is different -- during the peak of the enthusiasm was the investment proposal at Rs 25 trillion. This number was down to Rs 6.3 trillion last year. In the last few years, this figure has not gone up beyond Rs 10 trillion. In today’s context, Rs 6 trillion is much smaller (if you look at nominal terms).

The Reserve Bank’s Order Books, Inventories and Capacity Utilisation Survey (OBICUS) says the capacity utilisation of the Indian industry is of the order of 66 per cent today. We have seen in the past unless this figure is 80-85 per cent, industries do not invest. Thus, the investments will not happen in 2021-2022 nor in 2022-2023.

What is hurting investments

There is no doubt about the importance of investments. To attract investments, the investment climate should be conducive for people that are taking risks.

Retrospective taxes are not good, in addition to arbitrary taxation. The heavy hand of the government still seems to be around. It will be a serious problem.

The government needs to ensure that arbitrary policy intervention, arbitrary taxation, and fear of arbitrary raids are taken care of. There is a need for a stable policy environment that enables industries to take risks. It needs to be noted that business failure is not equal to being a crook. Failure should not shun entrepreneurs forever. Enterprises are not appreciated in India and this needs to be addressed.

FDI is critical and good. But I don't think India lacks entrepreneurship or the ability to make large investments. In 1991-1992, we broke away from our path. Even during that time, FDI did not play a big role. It was Indian entrepreneurship that spurred growth.

FDI is most welcome but very often, it goes bad. This is mainly because these companies look at India as a third world country where they can get away with a little bad governance. That is what one should be wary about. I am concerned about the well-being of fellow citizens.

The law of the land should be conducive to all entrepreneurs. FDI is not critical, investments are critical.

This will enable the government to come out with its own data on unemployment.

CMIE would have spurred the government to get into action to release employment data. Sometimes, the pressure that comes through the media and others is a bit intense. But we will continue doing what we are doing.

Over the last few years, access to primary data has become difficult. This is where CMIE has stepped in to provide data on consumer price index, employment data and others.