A fan page took to share visuals of the Bollywood star walking through the lanes of Jammu's Mata Vaishno Devi Shrine. This visit comes days after he offered prayers at Mecca

Shah Rukh Khan seems to be on a tour holy places since the onset of December. After wrapping up his shoot from Dunki, he sought blessings at the Makkah Sharif. Now, SRK was spotted visiting the Vaishno Devi mandir. The video of his visit to the holy temple was shared a few minutes ago on Twitter and has now gone viral on social media.

A fan page took to share visuals of the Bollywood star walking through the lanes of Jammu's Mata Vaishno Devi Shrine. This visit comes days after he offered prayers at Mecca.

During the early days of this month, SRK was spotted performing Umrah in the holy city of Mecca. Fan pages captured and circulated his images from the Makkah Masjid-al-Haram while showing him dressed in pure white attire.

Meanwhile, Shah Rukh Khan and his fans are awaiting the release of the action-packed film 'Pathaan'. The film is scheduled to hit theatres on January 25, 2023. John Abraham and Deepika Padukone are also a part of this Siddharth Anand's directorial.

A very big Shukran to @mocsaudi_en , the team and all who made this shoot schedule of #Dunki so smooth… pic.twitter.com/gjCqCMRSZk 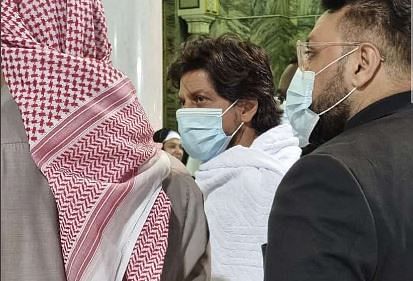