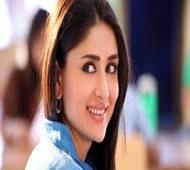 The feisty Kareena Kapoor, whose much talked about film Ki & Ka is releasing today, is now out with an extremely hilarious dubsmash video that features her alongwith the extremely famous ‘shopkeeper’ Gaurav Gera. The video has Kareena Kapoor mouthing the famous lines from the smash hit film Kabhi Khushi Kabhi Gham that featured her alongwith the likes of Hrithik Roshan, Shah Rukh Khan and Amitabh Bachchan.

The dialogue that Kareena Kapoor speaks in the dubsmash is “Kaun hai wo, jisne doobara mudke mujhe nai dekha? Who is he”. To which, Gaurav, in his trademarked accent, answers “Mainâ¦ Shopekeeper”. The expression that Kareena Kapoor gives after that is simply priceless.

Kareena makes her Dubsmash debut with her famous lines to @iHrithik in #K3G, with @gauravgera! pic.twitter.com/Nic4UG0zAf