Chitra Wagh had accused Urfi Javed of "indulging in nudity on the streets of Mumbai."

Television actress Urfi Javed has reacted strongly after Chitra Wagh, the state president of Mahila Morcha of BJP in Maharashtra, criticised her for her fashion choices. For those unversed, Chitra Wagh had accused the actress of "indulging in nudity on the streets of Mumbai."

Reacting to the news, Urfi took to her Instagram stories and wrote, "I'm so proud of myself. Good job Chitra Wagh."

In another story, Urfi said she is ready to go to jail if the politician will disclose her and her family members' assets. "I don't even want a trial or that bullshit, I'm ready to go jail right now if you disclose your and your family members assets. Tell the world how much a politician earns and from where. Also from time to time multiple men in your party have been accused of harassment etc never seen you doing anything for that women Mrs Chitra Wagh," she wrote. 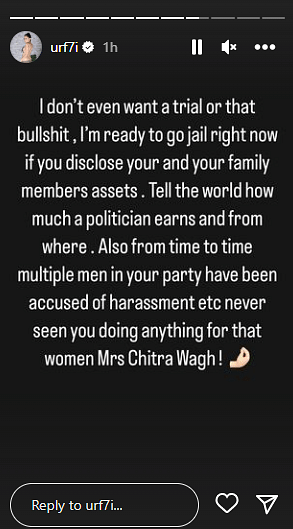 She added "﻿Started my new year with another police complaint from another politician! Bc asli kaam nahi hai in politicians k Paas? Are these politicians, lawyers dumb? There is literally no article in the constitution that can be put on me to send me to jail. The definition of vulgarity, nudity defers from person to person. Unless my nipples and my vagina is seen, you can't send me to jail."

"These people are only doing this for media attention. I got some better ideas for you Chitra Wagh, how about doing something against humanity trafficking and sex trafficking in Mumhai which is still very much there. How about shutting those illegal dance Bars (which are still very much there), how about something against illegal prostitution which again exits everywhere in Mumbai," Urfi further added. Recently, a video of Urfi went viral on the internet in which she was seen wearing a black cutout top with jeans and stepping out in Mumbai for some professional commitments. Sharing the video on her Twitter handle, Wagh accused the actress of "indulging in nudity publicly on the streets of Mumbai." She also demanded that Urfi be arrested.

Sharing the video, Wagh wrote, "What's happening in Mumbai? Does the Mumbai Police have any IPC/CRPC sections to stop this woman who is openly indulging in nudity on the streets of Mumbai? Arrest her as soon as possible." The BJP leader added, "On one hand, innocent girls/women are falling prey to perverts, and on the other hand, this woman is only spreading more perversion." This year, Urfi has found herself embroiled in endless controversies. From politicians and activists lofing complaints and FIRs against her to trolls sending rape and death threats, the actress has been making headlines all year round.

Urfi became a household name after she participated in Karan Johar's 'Bigg Boss OTT'. At present, she is a contestant in the reality show 'Splitsvilla 14'.