Killer Queen brings back the original cast alongside a posse of newcomers for another heady cocktail of flesh tearing, blood sputtering in all directions and bones crunching, with a side of out-and-out affected fun in keeping with the genre.
Anupama Chandra 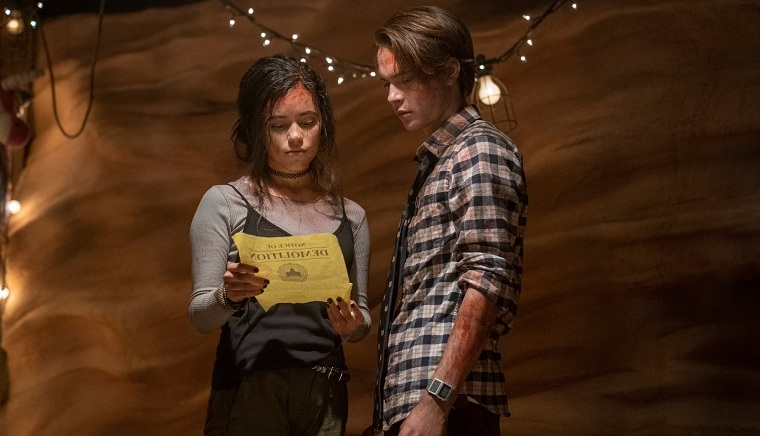 The Babysitter: Killer Queen is the much-awaited sequel to the cult American comic horror film The Babysitter. The film takes forward the story of Cole Johnson, whose babysitter and her blood cult had tried to kill him in the first instalment, by picking up the threads where he is a junior high school student. Cole has to take up cudgels against new and returning members of the said satanic sect in order to survive a night, alongside a new mysterious girl who seemingly spells trouble or does she?

Directed and produced by McG of the Charlie’s Angels movie franchise fame, this horror comedy is a sequel to the campy and commended ‘The Babysitter’, which earned its own following back in the day. With this instalment, another true-blue franchise is added to the cache of the director and the streaming platform. The Killer Queen sequel brings back the original cast alongside a posse of newcomers for another heady cocktail of flesh tearing, blood sputtering in all directions and bones crunching, with a side of out-and-out affected fun in keeping with the genre.

Cole, played by an unaffected Judah Lewis, seems to be recovering from a bloodthirsty night when he was attacked by his beloved babysitter Bee played by the gorgeous Samara Weaving (she earned her stripes with this breakout Hollywood role) and her demonic gang. As if still fighting nightmares is not enough, he is constantly badgered by disbelieving parents and classmates for being and having imagined a whole lot of “crazy”. The story moves gradually, with old pal Melanie (pouty Emily Alyn Lind) staying aloof and a goth-dressing pretty newbie Phoebe (a loco Jenna Ortega) catching everyone’s and Cole’s eye with her self-endorsed brand of wild.

One Friday, Cole ditches school to escape with Melanie for the weekend, and shortly after the film dramatically picks up pace. Surviving a murderous cult once is apparently too trite, so the old band mysteriously resurfaces to hunt Cole all over again and he is back on the run with ample help from Phoebe, but will that be enough? The pace ebbs and flows but it works out in the end. After watching this episode, I caught rushes of the first instalment and found that this one has upped the level of weirdness and gruesome. For someone with zilch taste of this genre, the movie and the smart twist in the tale left me pleasantly surprised and having fun, as a prime personality is thrown a line with an unexpected, stirring redemption character arc that cannot be mentioned here for fear of revealing the plot.

The Marvel Cinematic Universe franchise has taught my generation to watch out for the credits and beyond if necessary for further twists and McG doesn’t disappoint. While the credits play, I caught a glimpse of what looked like the Devil's Book that survives this instalment as well. Does that mean we will soon be reviewing a third chapter? With the movie starring in the Top 10 list of Netflix since its release and fan clubs going crazy dissecting and bisecting every (in)significant detail, if I were the director I would certainly bring it back. Especially since, as an audience member and latecomer to this genus, I enjoyed a ridiculously fun ride on this trip. The Social Dilemma review: An unnerving, unsettling but essential watch