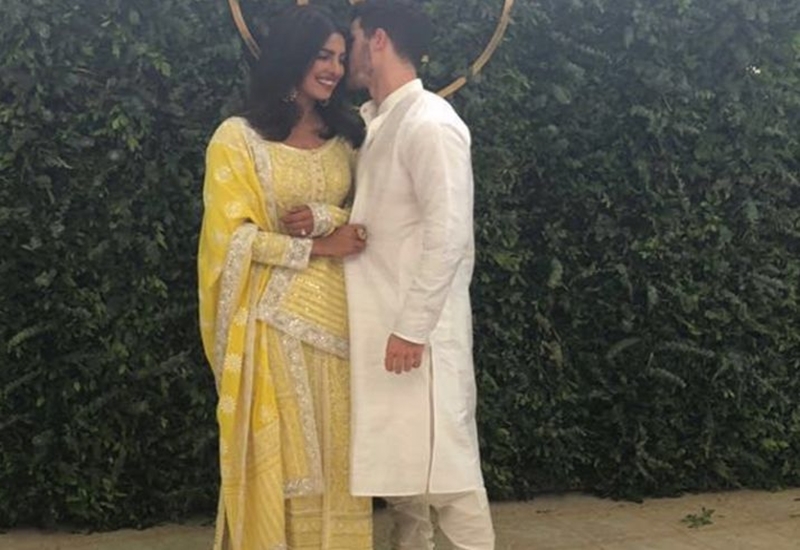 Mumbai: Actor Parineeti Chopra arrived at the residence of her cousin Priyanka Chopra to attend a ceremony related to her engagement to American singer Nick Jonas here. Dressed in a yellow traditional outfit, Parineeti, 29, arrived at Priyanka’s suburban Juhu residence after she flew in here from Lucknow, where she was shooting for her film “Jabariya Jodi”.

According to reports, a small puja and roka ceremony will take place that will be attended by Priyanka and Nick’s family members. At about 8 am, a priest entered the building with two huge bags in his hands, followed by a man carrying a bag full of sweets. Caterers too have arrived. Priyanka’s close friend and screenwriter Mushtaq Sheikh was also seen entering the residence for the ceremony. He was dressed in traditional kurta pyjama.

Nick, 25, arrived in Mumbai on Thursday with his parents — Denise Miller-Jonas and Paul Kevin Jonas — and they were seen carrying a Tiffany & Co bag, the famous jewellery brand from whose London store the American singer bought the engagement ring. They were received by Priyanka, 36, at the Chhatrapati Shivaji International Airport here. Yesterday, the couple went for a dinner along with their families at JW Marriott Hotel in Juhu. Clad in a grey dress, Priyanka walked hand in hand with Nick, who was wearing a navy blue tee and grey pants.

The couple will reportedly be throwing a party for their friends and family at her residence today to celebrate their engagement . They reportedly got engaged last month after Priyanka dropped out of Salman Khan starrer “Bharat”. Priyanka, who is currently in Mumbai to shoot for Shonali Bose’s film “The Sky is Pink”, was spotted wearing the ring at designer Manish Malhotra’s party recently.

The duo sparked dating speculations early in June when they were photographed enjoying multiple dates over Memorial Day weekend. Nick had met Priyanka’s family in June and even spent quality time with her family in Goa. The couple had also posed for the shutterbugs during the the engagement party of Mukesh Ambani’s son Akash. But it is for the first time that parents from both the sides are meeting.

Nick has already introduced the actor to his family members when she attended the wedding of his cousin in the US. They first came together when they posed for photos on the red carpet together in Ralph Lauren designs at the 2017 Met Gala. Priyanka has not commented on her relationship, saying her personal life is not for “public consumption”.