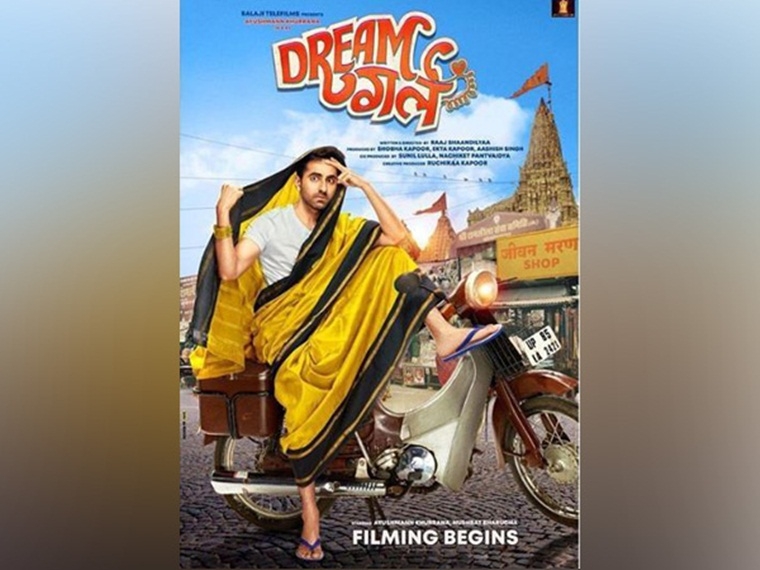 New Delhi: Ayushmann Khurrana and Nushrat Bharucha are all set to tickle you with the trailer of the highly-anticipated film 'Dream Girl' which will definitely leave you rolling on the floor laughing.

The two-minute-52-seconds video opens up with Ayushmann at a stage show playing 'Sita' and 'Radha' and getting applauds for his acting as a female. Although his family and friends tease him for imitating women, he takes up the job of a female telecaller named 'Pooja' who flirts with his male customers. The trailer also shows Ayushmann pretending to be the seductive Pooja while talking with customers.

In the trailer what will appease the viewers most is the fact that 'Vicky Donor' actor will be seen wearing a saree. The 'Sonu Ke Titu Ki Sweety' star Nushrat is playing the love interest of Ayushmann in the film. In the trailer, viewers can also catch a glimpse of Manjot Singh who plays the role of a friend of Ayushmann who vows to help his friend in all circumstances.

In one of the scenes, using the imaginary name 'Pooja' lands Ayushmann in great trouble as his customers engage in a deadly fight to woo 'Pooja' and later ends up indulging into a violent fight leaving all injured. The upcoming comedy-drama comprising of funny punches and hilarious acting of Ayushmann will definitely leave you in splits.

Film critic and Trade analyst Taran Adarsh shared the trailer on Twitter. In December, the first poster of 'Dream Girl' was unveiled by Ayushmann on his Instagram account. In the poster, he was seen sitting on a scooter wearing a yellow coloured saree over a white tee. He was also wearing a set of bangles and rubber slippers. In the same post, he announced the commencement of shooting for the film in Mathura.

The upcoming film has aroused curiosity among the audience ever since it was announced with a promo video in November. The video showed Ayushmann discussing what to work on next with his team. While they come up with overdone content, the waiter suggests a script which the actor ends up loving and choosing for his next film. Apart from Ayushmann, Anu Kapoor will be seen playing the role of his father. Backed by Ekta Kapoor, the film is being helmed by Raaj Shaandilyaa, and is slated to hit the big screens on September 13, this year.