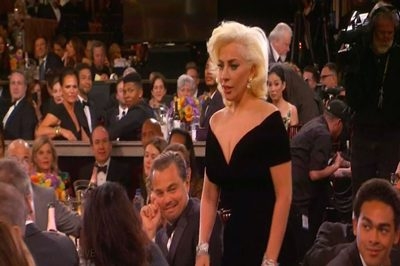 Los Angeles: Hollywood star Leonardo DiCaprio and singer-actress Lady Gaga were spotted having a great time at an after party, shutting down feud rumour following their viral Golden Globes moment. Internet had a field day with best actor winner DiCaprio’s surprised eye-roll after Gaga grazed his arm on her way to accept her trophy at the 73rd Golden Globe Awards.

The moment captured by cameras left everyone guessing about his peculiar expression and whether the nudge by Gaga was intentional. The two were spotted chatting with each other as they celebrated their respective wins at the Creative Artist Agency’s Golden Globes after party in West Hollywood’s Sunset Tower Hotel, reported Aceshowbiz.

“Leo was shocked that his chuckle at GaGa went viral and became a thing,” an eyewitness said, adding that the two and GaGa’s fiance Taylor Kinney all laughed while watching a clip which showed the moment when DiCaprio gave GaGa side eyes after she accidentally bumped into him at the Sunday ceremony. “They hung out for twenty minutes laughing and chatting and Leo explained that he had no idea she was even behind him when she walked up,” the source continued.

“He was having a moment laughing with who he was sitting with about something else and then his elbow was out and he had no idea she was walking by – it’s so crowded in that room.” People started to speculate that DiCaprio threw shade at GaGa when the 41-year-old actor gave the gaze at the singer.

Though DiCaprio had clarified that it was just an expression of shock because he didn’t know “what was passing” him, a source claimed that Kinney was outraged by DiCaprio’s behaviour and asked him to apologise to the Golden Globe-winning actress.