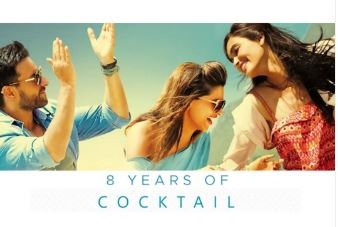 New Delhi: Actor Deepika Padukone celebrated eight years of her hit film 'Cocktail' on Monday by changing her Instagram and Twitter names to 'Veronica', the character she portrayed in the film.

The 34-year-old actor also changed her profile picture on the two social media platforms to her iconic first look from the movie.

Padukone's introductory look in the film featured her partying in a dazzling black and bronze-coloured dress as Yo Yo Honey Singh and Gippy Grewal's peppy number 'Angreji Beat' was played in the background.

The Homi Adjania directorial featured Padukone, Penty and Saif Ali Khan in lead roles. The romantic-drama revolved around a bitter-sweet relationship between the trio which ends into a love triangle.

Released in 2012, the film continues to win hearts with its saga of romance and friendship. sam