With the Taliban government in Afghanistan announcing that girls' higher and secondary education schools will remain closed, many Twitter users have slammed the move.

Not following up on the promise of reopening schools for all girls would mean that female students above the sixth grade will not be able to attend.

Influential dignitaries from South Asia have also been vocal about the move by the Taliban. Author of books such as The Kite Runner and A Thousand Splendid Suns, renowned Afghan-American novelist Khaled Hosseini took to Twitter to express his concern. He tweeted,"The Taliban have backtracked on their promise to open high schools for girls. Afghan girls must not be denied their fundamental right to education. Depriving young women of education is another crippling blow to Afghanistan’s already shaky future."

Nobel laureate and UN Messenger of Peace, Malala Yousafzai also used her platform to criticize the Taliban. "I had one hope for today: that Afghan girls walking to school would not be sent back home. But the Taliban did not keep their promise. They will keep finding excuses to stop girls from learning – because they are afraid of educated girls and empowered women. #LetAfghanGirlsLearn," said the tweet by Malala, who was herself shot by a Tehrik-i-Taliban member in Pakistan in 2012.

Twitter users liken situation to the Hijab Row in K'taka

Due to the recent decision by Karnataka HC, to not put a stay on state government's order to restrict wearing of hijabs in schools and colleges, many Muslim girl students decided not to attend classes. Some Twitter users in India compared the Taliban's announcement with the aftermath of the High Court's decision.

"In an 11th hour decision Taliban decides to ban girls' education, after assuring them to do so. With two months to go for finals #Karnataka Govt issued #HijabBan, hiding behind technicalities. Same energy," said a tweet by a writer named Sangita on the social media platform.

Another tweet by a user also compared the incidents for being restrictive. "Taliban have closed schools to girls, mere hours after reopening them. Meanwhile in Karnataka, girls wearing Hijab aren't allowed into schools. Everywhere, the men doing this say they want what is good for the girls," said Vimoh, a writer and podcaster.

Afghanistan's Ministry of Education notice said on Wednesday that schools for girls would be closed until a plan was drawn up in accordance with Islamic law and Afghan culture, according to Bakhtar News Agency, a government news agency.

Read Also
Here's what the US, UK have to say on Taliban's decision to close high schools for Afghan girls 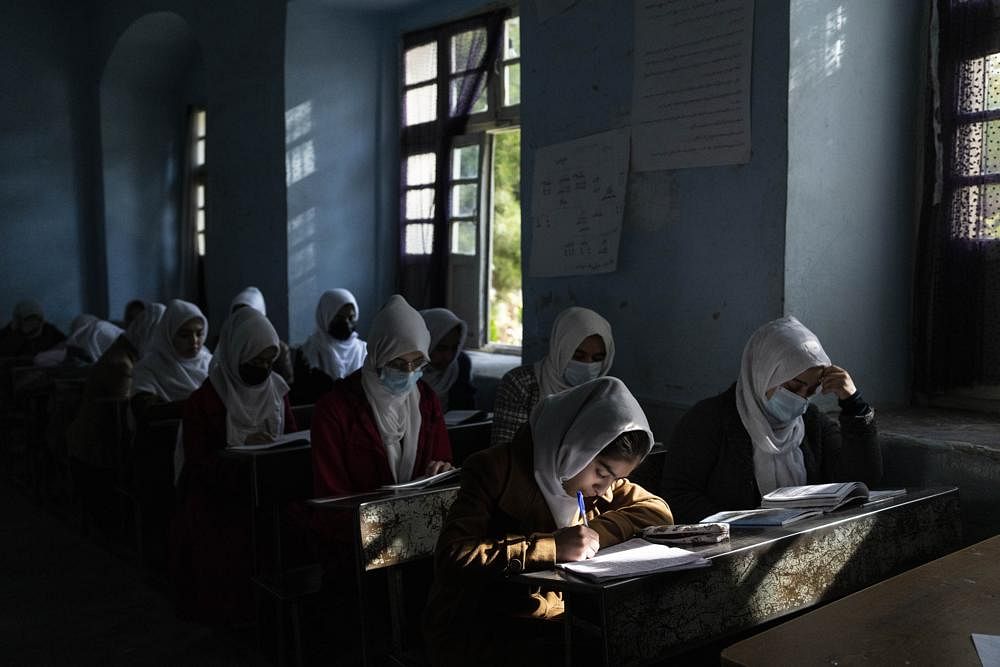