In view of the red alert issued in Odisha and Andhra Pradesh for Cyclone Jawad for 4th December, UGC-NET December 2020 and June 2021 examinations, scheduled to be held on December 6, has been rescheduled in the two states.

A revised datasheet for rescheduled examination will be uploaded later.

However, the schedule in other States will remain unchanged.

As per the time table of UGC-NET, examination is scheduled to be held for the subjects — Education, Kashmiri, Malayalam, Russian, Electronic Science and Social Medicine and Community Health on December 3 and Assamese and Bodo on December 4, 2021.

On the other hand, Odisha tourism also today cancelled the ongoing International sand art festival and Konark festival due to the cyclone.

Due to the red alert issued in Odisha and Andhra Pradesh for #JawadCyclone for 4th Dec, UGC-NET December 2020 and June 2021 Examinations, scheduled to be held on 5 Dec, has been rescheduled in the two states. A revised datasheet for rescheduled examination will be uploaded later. pic.twitter.com/192qHetRi6

Odisha tourism stated, "As per the reports of the India Meteorological Department (IMD) and advisories issued by Special Relief Commissioner on Cyclonic Storm Jawad reaching the coasts of Odisha, we regret to inform that the Konark Festival and International Sand Art Festival held in Konark are being called off with immediate effect." The 12th edition of the five days International sand art festival was started on December 1 at Chandrabhaga beach in Konark, Odisha.

Earlier, IMD informed that the low-pressure region in the Bay of Bengal is expected to intensify into Cyclone Jawad and is expected to reach the coast of north Andhra Pradesh - Odisha around the morning of Saturday, December 4, 2021, with the wind speed ranging up to 100 kmph.

It is likely to cause heavy rainfall in the coastal districts of Andhra Pradesh, Odisha and West Bengal. IMD has been issuing regular bulletins with the latest forecast to all the concerned states.

Prime Minister Narendra Modi also chaired a high-level meeting on Thursday to review the preparedness of States and Central Ministries and concerned agencies to deal with the situation arising out of the likely formation of cyclone Jawad, informed the Prime Minister's Office.

The Cabinet Secretary has also reviewed the situation and preparedness with the Chief Secretaries of all the Coastal States and Central Ministries or Agencies concerned. 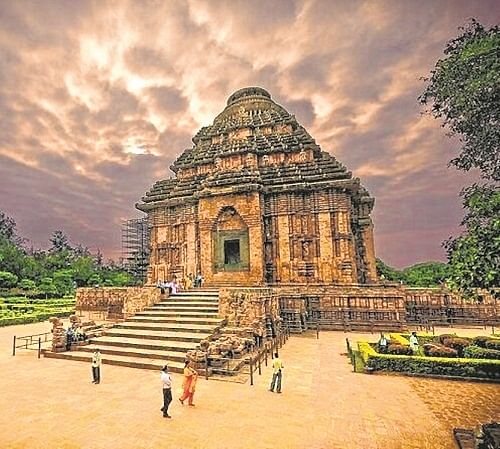