The five students have sought for transfer certificates to attend other colleges, according to Principal Anusuya Rai. They will, however, be required to submit a new letter with specified changes. After the girls submit their letters, the college administration will decide whether or not to issue certificates.

Due to the evaluation work, the undergraduate courses teaching has been shifted online from Monday. Except for a few students, majority of the 44 Muslim students who study in the college had attended classes as per the guidelines.

After the announcement of II PUC results, the admissions to UG courses will begin from this week. Mangaluru University Vice Chancellor P.S. Yadapaditaya had earlier announced that the university would make special provisions for Muslim girls who want to join other colleges in connection with the hijab rule.

Hundreds of students studying in University College in Mangaluru city had boycotted the classes on May 26 protesting against allowing Muslim girl students to attend classes in hijab.

The Hijab crisis, which started as a protest by 6 students of Udupi Pre-University Girl's College, turned into a major crisis-like situation in Karnataka last year.

The issue attracted international attention and dented the image of the state. The students then filed a petition with the High Court seeking permission to wear hijab in classrooms.

The High Court taking note of the crisis situation in the state and sensitivity of the matter constituted a special bench of three judges and heard the petition immediately.

The Special Bench headed by the Karnataka High Court Chief Justice Ritu Raj Awasthi dismissed the petition filed by the students and observed that wearing of hijab is not an essential practice in Islam.

The government of Karnataka has issued guidelines for schools and pre university colleges making uniform compulsory for students without giving any room for wearing of hijab in classrooms. 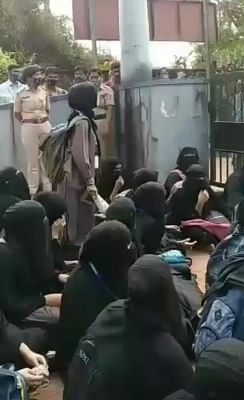