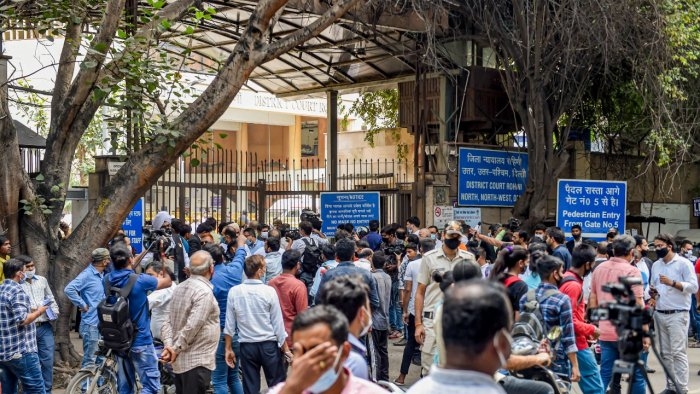 Two assailants shot dead Jitender Gogi inside the Rohini court on September 24. Both then were killed in retaliatory firing by the police. | PTI

Gangsters Tillu Tajpuriya and Naveen Balli have been arrested in connection with the killing of Jitender Gogi in a shootout inside a courtroom in Delhi's Rohini last month, officials said on Thursday.

A few days ago, the Crime Branch had taken jailed gangster Tillu Tajpuriya -- one of the prime conspirators -- in its custody to grill him about Gogi's killing.

Followed by his interrogation, jailed gangster Naveen Balli was also taken into custody on Tuesday for two days in connection with the incident. According to police, Balli was involved in the conspiracy to kill Gogi.

It was on his instructions that one of his associates Naveen Hooda had brought a Nepali citizen to Rohini court in a lawyer's dress armed with weapons on the day of the incident to join Rahul and Jagga, the other assailants. Both Tajpuriya and Bali were lodged in jail number 15 of Mandoli prison.

Jailed gangster Sunil Rathee is also suspected to have played a role and is under the scanner.

A preliminary investigation into the case had revealed that the instruction to kill Gogi was given on phone by Tajpuriya.

Tajpuriya was in touch with his associates over VoIP call directing them on how to execute the plan, police had said.

The Special Cell of the Delhi Police had also arrested Umang Yadav and Vinay from a flat in northwest Delhi's Haiderpur area in connection with the shootout and their custody was later handed over to the Crime Branch which is probing the case, police officials had said.

Two assailants shot dead Jitender Gogi inside the Rohini court on September 24. Both then were killed in retaliatory firing by the police.

The Gogi and Tillu gangs are reportedly at war for years and their rivalry has claimed dozens of lives. To attain supremacy, these two gangs have formed alliances with other inter-state gangsters.

Gogi gang has allied with gangster Kala Jathedi, Lawrence Bishnoi, Sampat Nehra, Ashok Pradhan, Hashim Baba while the Tillu gang is being supported by Neeraj Bawana, Sunil Rathee, Naveen Bali, and Nasir, according to the police.