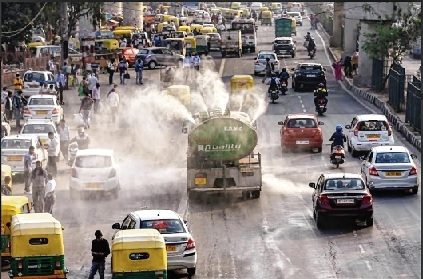 New Delhi: The Delhi government on Wednesday inspected 226 construction sites as part of its anti-dust campaign. Sixty nine sites were found non-compliant and a fine of around Rs 19.4 lakh was proposed for violating dust control norms. As per the Dust Drive Report of the Delhi Pollution Control Committee (DPCC), as many as 522 construction sites were inspected on October 7, 8, 11 and 12 — out of which 165 sites were found violating the guidelines.

The data in the report said that show cause notices have been issued to the 165 violating sites and an amount of Rs 53.5 lakh has been proposed as environment damage compensation (EDC) against them.

The government under Chief Minister Arvind Kejriwal had on October 6 announced that it will run an anti-dust campaign from October 7 to 29. Thirty-one teams, including 17 belonging to the DPCC and 14 green marshals, were constituted to conduct inspections at construction sites and monitor the situation. The Delhi government had earlier issued 14-point guidelines for construction and demolition agencies to curb dust pollution.

According to the National Green Tribunal's guidelines, a fine ranging from Rs 10,000 to Rs 5 lakh can be imposed for violation of rules at construction sites.

Construction sites should be covered from all sides using tin sheds. The sites measuring more than 20,000 square metres will have to deploy anti-smog guns.

Vehicles carrying construction material should also be covered. There should be no collection of construction and demolition (C&D) waste on the roadside.

Wet jets be used for the cutting and grinding of stones. Such activity will not be allowed in the open. Unpaved surfaces and areas with loose soil should be adequately sprinkled with water to suppress dust, roads around construction sites must be paved and blacktopped.

Construction and demolition waste should be recycled on-site or transported to authorised recycling facility and due record of the same should be maintained.

Agencies also have to provide adequate safety gear such as masks to all workers involved in activities such as loading, unloading and handling of construction material and waste.

The Delhi government had issued a similar set of guidelines last year before the pollution season, and several construction agencies, including government and government-funded agencies such as the Public Works Department (PWD) and the NBCC (India) Limited, were slapped with hefty fines for violating dust mitigation guidelines