One of the raging debates of this edition was the deteriorating standard of umpiring. We take a look at the glaring mistakes that had people saying ‘pull up the umpires’ in the cash-rich league

Kieron Pollard was reprimanded after he showed dissent at the umpire’s decision in the final of the IPL 2019 between Mumbai Indians and Chennai Super Kings (CSK).

Pollard was visibly unhappy with a decision made by umpire Nitin Menon in the final over of Mumbai’s innings. He was irked with the umpire’s decision to not adjudge a delivery by Dwayne Bravo as wide. Mocking the decision, the West Indian all-rounder went on to take strike well away from the stumps and near the ‘wide-line’ before pulling away as Bravo ran in. 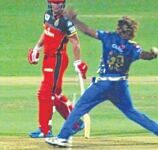 One of the most glaring mistakes by an umpire was made in RCB’s clash against MI at home. RCB needed seven runs off the last ball but Lasith Malinga conceded just one to win the contest for his side. However, after the match was over, cameras revealed Malinga had overstepped, which was not spotted by umpire Sundaram Ravi. “We are playing at the IPL level and not playing club cricket. The umpires should have their eyes open. That is a ridiculous call at the last ball,” Virat Kohli had said after the match. “If it is a game of margins, I don’t know what is happening. They should have been more sharp and careful out there.” Mumbai captain Rohit Sharma had also said such mistakes were “not good for the game”.

Another umpiring mistake came during a match between Kolkata Knight Riders (KKR) and Mumbai Indians when Rohit Sharma was adjudged LBW while his side was chasing a massive 233. The incident happened in the fourth over of the second innings when Rohit was given out to an attempted hoick that he missed off Harry Gurney. Replays showed that the ball was just clipping leg stump as the Mumbai Indians skipper reviewed the decision. The decision could have gone either way but since the umpire’s original decision was that of ‘out’, the third umpire stayed with the on-field umpire’s call. Rohit was displeased with the decision and after having a couple of words with the umpire, he broke the stumps with his bat. Following the incident, the MI skipper was also fined 15 per cent of his match fee.

CSK skipper MS Dhoni, who is known as ‘Captain Cool’, too suffered a meltdown and stormed from his dugout to confront the umpires after a no-ball call for a high full toss was reversed against Rajasthan Royals in an IPL 2019 game. The incident happened when CSK needed 18 runs from the final over. The fourth delivery of the over bowled by Ben Stokes to Mitchell Santner was first called a no-ball by umpire Ulhas Gandhe but the decision was changed after he consulted with square-leg umpire Bruce Oxenford. At this point Dhoni – who was in the dugout – stormed into the field and confronted both the umpires, asking them of the reason for reversing the decision. Quite a few Rajasthan players also got involved in what seemed to be a heated discussion. Ultimately, the delivery was deemed legal but replays suggested it was a waist high no-ball. Dhoni was fined 50 per cent of his match fee for his behaviour, which many former cricketers termed as a “light punishment” for the wicketkeeper-batsman.

RCB was at the receiving end of yet another umpiring mistake in their final league game against Sunrisers Hyderabad. Umesh Yadav was bowling the final over when the fifth delivery was adjudged to be a front-foot no ball by Nigel Llong. However, the replays showed his foot was inches behind the crease.