Atma Nirbhar Bharat and healthcare: Pushing a weak and sick India into the ICU

For policymakers and those seriously concerned about healthcare, a viewing of TedX Gateway Webinar with Dr. Zarir F Udwadia (Pulmonologist) which can be viewed here, should be made mandatory.

It sends across one message that is stark and simple – the ongoing Covid-19 pandemic is not the end of the story. There will be more casualties and even more epidemics. India needs to be prepared. And this is precisely what policymakers have not focussed on. Not even in the Atma Nirbhar presentations.

There was much expectation, and need, for the government to focus on healthcare. This was on account of several reasons.

First, just look at our government hospitals. See the crowds milling around, even before the Covid-19 pandemic began. The reason for the crowds being there is obvious to anyone familiar with the India scene. Most patients are poor and cannot afford private hospitals. Moreover, many of the private hospitals are poorly equipped, but fleece the poor and the ignorant. And the crowds are huge because the government has not invested enough on healthcare. 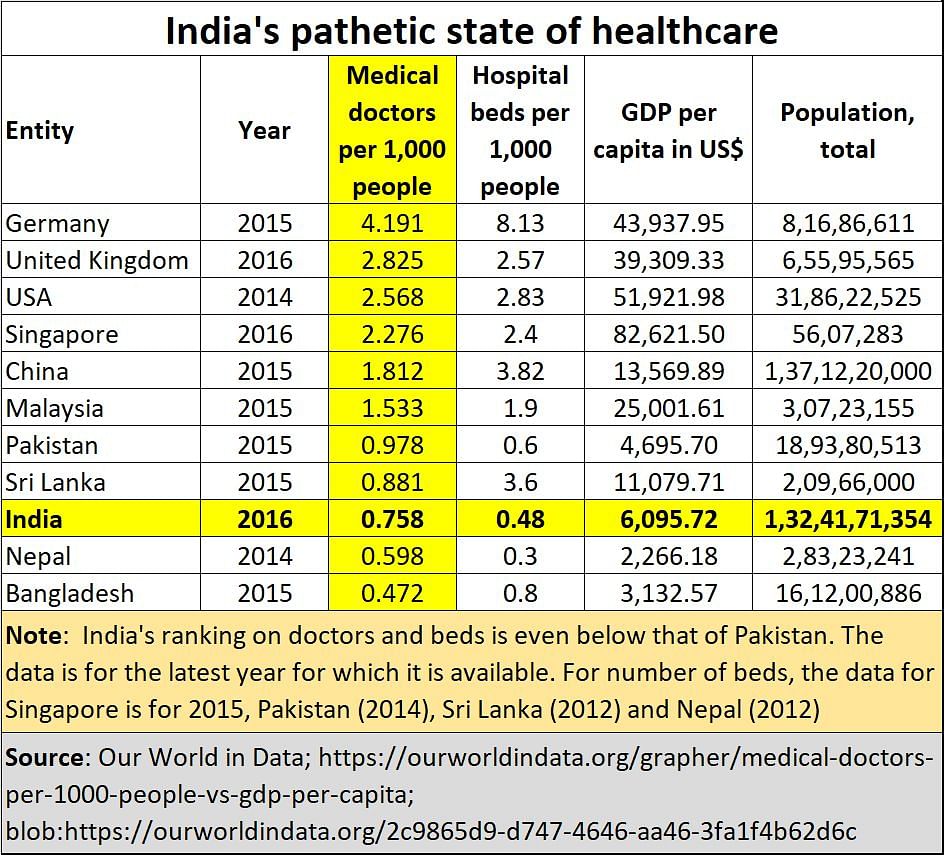 Pakistan has more doctors and hospital beds than India has for every 1,000 people (see chart). India has become a story of exploiting the poor. These funds are invariably transferred to people from whom politicians get their votes.

Second, despite going to government hospitals, the poor often find that they have to go back to private doctors and clinics, because the government hospitals either complain about medicines not being available, or the x-ray or sonar equipment being out of order, or (shockingly) even the pathology lab not working. Look outside JJ Hospital in Mumbai and look at the innumerable cubby-holes of shops mushrooming on the side roads. These are clinics to which hospital staff send poor patients because they say the machines are not working. As a result, the average Indian spends more out of pocket on healthcare (as a percentage of income) than most people in the world (see chart). 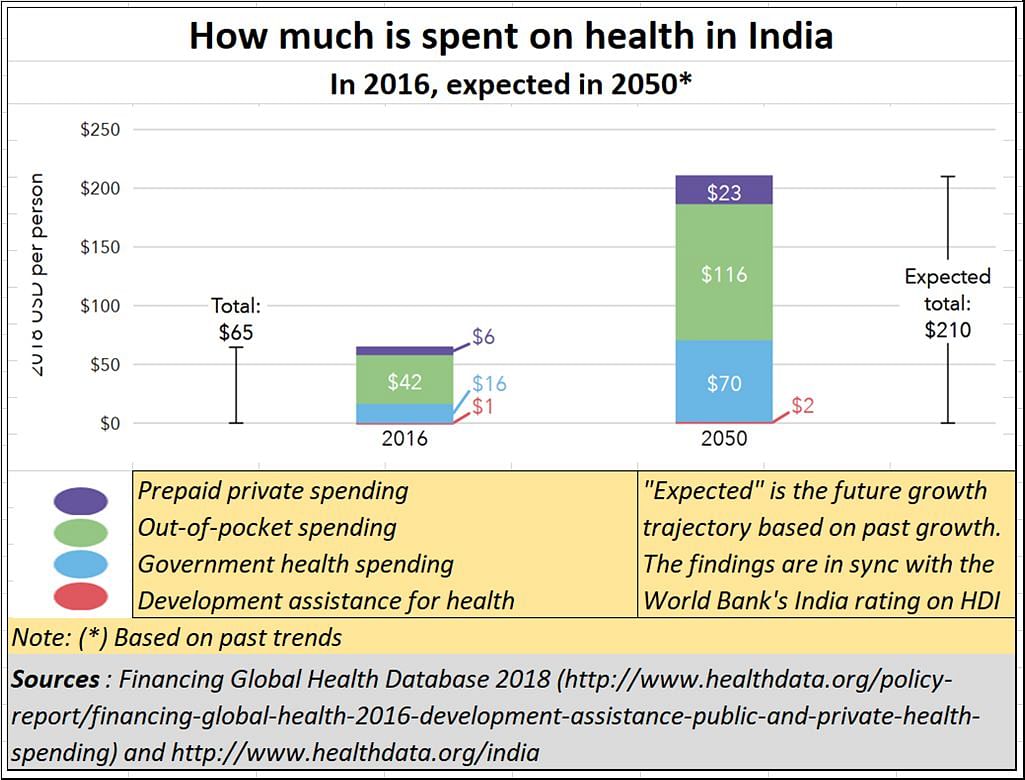 And there is a third reason as well. In their greed to get votes, politicians have turned democracy on its head and have discovered a macabre way of winning elections. They have encouraged slums to the point when no type of social distancing will work (see chart). The number of slums, and the populations in them have been growing faster than for other sections of the population. And this is true for most states in India. Maharashtra and Andhra Pradesh head this infamous list. For more on slums, you should look up the website. The next epidemic, as Dr. Udwadia points out, may be more infectious and more deadly than the coronavirus. And yet, you have politicians abetting the growth of slums (see chart), and even promising them exemption from paying property tax forever. The death rates then will be staggering, even unstoppable. The exodus of migrants from cities, is thus understandable. Nobody wants to die in the hellhole that politicians have made of cities.

They have understood that the politicians first starve medicare, then create conditions which make medicare a desperate and crying need.

That is why a policy framework as part of Atma Nirbhar was urgently needed. There was a need to stop the growth of slums. That could be done by referring the matter to the election commission to define who should be allowed to vote and where. Ideally, a voter should be one who has a legal place of residence. Hence, a squatter who emerges from an illegal residence which he has wrongfully occupied, can be told to vote from the place he comes from, not the place he illegally occupies. He can get a work permit for the city, but not the right to vote from there. If that is not done, you might as well allow the stuffing of ballot boxes with bogus votes. But once again policymakers were blind to this need.

You also need a sensible policy framework for insurance, healthcare, and medical costs. Unless insurance is allowed to manage medicare in India, the politician – abetted by the bureaucrat – will wreck it. Insurance has the money power, the medical expertise (because it already has many health insurance companies) and can work out a sensible way of insuring pathology as well.

You need a policy to look after migrant workers as well. Remember they too are taxpayers. They might not have paid income tax, but they have paid indirect taxes on goods and services they have availed of. It is the responsibility of the government to look after them since it has also taken their money year after year. They have a right to shelter and healthcare, not the disease centres the government likes to call hospitals.

As Kiran Mazumdar Shaw, chairperson and managing director of Biocon Ltd, stated quite bluntly on Twitter, “The healthcare sector has been short-changed. No stimulus for hospitals who have to bear increased operating costs due to covid-related protocols.” In yet another tweet she said, “Most disappointed at the lack of bold measures in stimulus packages -don’t think demand will be created and consequently economic activity will be stifled. ₹20 trillion was a huge amount and it was meant to stimulate economic revival and growth."

And the irony is that in an attempt to treat Covid-19 patients, many state governments have shut hospitals for non-Covid-19 patients. This is despite the well-known fact that more people die of heart attacks, or tuberculosis or even diabetes than of Covid-19. India does not even know how to count its dead, and get them medically certified. We need policy guidelines on preventing such madness as well. At least, there will be something sensible in place when the next pandemic hits India.

Another absurdity is visible to everyone. The huge crowds milling around government hospitals actually offer India a huge opportunity. Sadly, the government has been blind to this. Begin with hospitals themselves. Most of them were made by the British, and not by the post-independence government of India. Moreover, the crowds milling around hospitals are patients that countries like Ukraine or Russia would love to have for their medical colleges. They offer a particularly good reason for government hospitals to increase the intake of medical students ten-fold at least. That would make India the global hub for medical education. Today, India makes other countries rich, by sending its students there to study medicine.

Of course, you will need good teachers as well. But good teachers come when they are picked up by merit and not because they belong to a reserved category. And for that, it is quite obvious that admission – not only for students, but also for teachers -- should strictly be on merit. If India can insist that cricket teams should only have meritorious batsmen, bowlers and fieldsmen, why should that not apply to medical seats and teachers as well ()?

Why should cricket be exempted from reservations and an even more critical function like saving lives be hobbled by reservations? If the government wants, it could offer backward communities additional coaching to compete in the entrance exams. It could offer them financial packages to set up their own clinics. But don’t destroy the quality of doctors, or teachers, just to win votes. And don’t try to artificially ramp up the numbers of doctors, by creating short terms bridge courses to convert homeopaths and paramedics into full-fledged doctors. As mentioned earlier, if short term bridge courses are the right way to go, why not have such courses for converting clerks into IAS officers!

Thus, countries like Ukraine and Russia offer medical education courses when they don’t have enough patients. Half the medical student’s understanding comes from dealing with patients and diagnosing them, day after day. In India, there are horror stories of how patients are paid to come to private hospitals (which also offer medical courses) to demonstrate to education inspectors that medical students do have access to patients. When the inspectors go, so do the ‘patients’. India has a strategic advantage in having so many patients. It should never have created a situation where students go overseas, spend overseas, create jobs overseas, because of little effective capacity building in this country itself.

This is where Atma Nirbhar ought to have spelt out policy – like short-term incentives for convert unviable hotels into hospitals, and long terms incentives for government hospitals to augment intake capacity for medical students. That is the way to prevent children dying, both from conventional killer-diseases and even the coronavirus epidemic.

There is a lot that could have been done. That vision and policy initiative was sorely needed. That is where vision and administrative capability matter. Unfortunately, neither was visible in the much hyped AtmaNirbharBharat.

That is a terrible tragedy.

Read Also
Rs 20 lakh crore economic stimulus: Will India ever be Aatma Nirbhar Bharat when it comes to... HomeBusinessAtma Nirbhar Bharat and healthcare: Pushing a weak and sick India into the ICU