"India's G20 agenda will be inclusive, ambitious, action-oriented, and decisive. Let us join together to make India's G20 Presidency a Presidency of healing, harmony and hope. Let us work together to shape a new paradigm - of human-centric globalisation," PM Modi said in his December 1 blog post.

He noted that humanity has so far fought for limited resources marked by confrontation and competition—between ideas, ideologies, and identities—while discussing the shaping of human history.

Now as India takes the mantle, PM Modi wondered whether the G20 could catalyse a fundamental mindset shift, to benefit humanity as a whole - a shift from a zero-sum mindset, fight over territory or resources, weaponization of essential goods etc? He questioned the claim that humans are inherently selfish and that conflict and greed are just part of human nature, asking why so many spiritual traditions advocating our fundamental oneness have persisted since time immemorial. "Some may argue that confrontation and greed are just human nature. I disagree. If humans were inherently selfish, what would explain the lasting appeal of so many spiritual traditions that advocate the fundamental one-ness of us all?" he asked.

He referred to one such popular Indian tradition that sees all living beings, and even inanimate things, as composed of the same five basic elements - the panch tatva of earth, water, fire, air and space. "Harmony among these elements - within us and between us - is essential for our physical, social and environmental wellbeing".

He further added, "India's G20 presidency will work to promote this universal sense of oneness. Hence our theme: One Earth, One Family, One Future." The Prime Minister lamented that despite having the means to produce enough to meet the basic needs of all people in the world, we have collectively failed to appreciate and suggested the need to shun fight for survival and look up to more peaceful and prosperous future.

He emphasised that "our era need not be one of war. Indeed, it must not be one!" The reference could be read as his sense of urgency to remove poverty and inequality and for that the need to stop squandering away of resources in senseless wars. This is possible by fostering honest and accommodating conversations.

He pointed to the world's greatest challenges, such as climate change and terrorism, and stated that these issues could be solved not by fighting each other, but only by working together.

The Prime Minister held that India and its thriving democracy could show the way for a collective response to global issues. He said that as the mother of democracy, India's national consensus is forged not by diktat, but by blending millions of free voices into one harmonious melody. 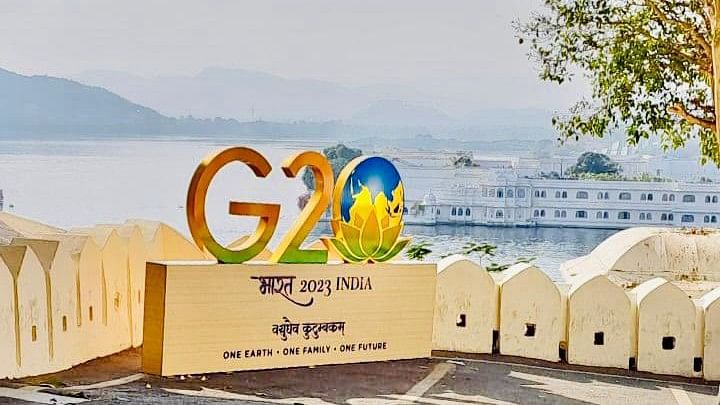 India, microcosm of the world

Describ­ing India as a microcosm of the world with its immense diversity of languages, religions, customs and beliefs, he asserted that it presents the oldest-known traditions of collective decision-making. This is one of the "great contributions of India to the foundational DNA of democracy." As to why India's G20 presidency raises hopes for acting as an engine of growth and global cooperation for prosperity, he said that India today is the fastest-growing large economy and has displayed the capacity to leveraged technology to create digital public goods that are open, inclusive and interoperable.

He added, "Fortunately, today's technology also gives us the means to address problems on a humanity-wide scale. The massive virtual worlds that we inhabit today demonstrate the scalability of digital technologies." According to him, there is a need to shift the paradigm that our survival depended on denying limited resources to others signifies the zero-sum mindset of the past.

He said that for promoting harmony within the human family, "we will seek to depoliticise the global supply of food, fertilisers and medical products, so that geopolitical tensions do not lead to humanitarian crises".He meant to emphasise that those whose needs are the greatest must always be our first concern. The reference was intended to point out the problems of hunger, starvation and malnutrition in many parts of developing countries and urgency to address them together on priority basis whatever it takes.

The Prime Minister concluded that the world needs to work together to shape a new paradigm - of human-centric globalisation. This would require an honest conversation among the most powerful countries - on mitigating risks posed by weapons of mass destruction and enhancing global security.

Additionally, he also indicated that G20 needs to be responsible even for those countries which are not members of the group.

He said, "Our G20 priorities will be shaped in consultation with not just our G20 partners, but also our fellow travellers in the global South, whose voice often goes unheard. Our priorities will focus on healing our One Earth, creating harmony within our One Family and giving hope for our One Future."

One of the messages of the Indian Prime Minister was "imbuing hope in our future generations" by good governance including citizen-centric governance model which would not consider development as an exercise in top-down governance, but rather a citizen-led people's movement.

He also emphasised that "we will encourage sustainable and environment-friendly lifestyles, based on India's tradition of trusteeship towards nature" for "healing our planet".