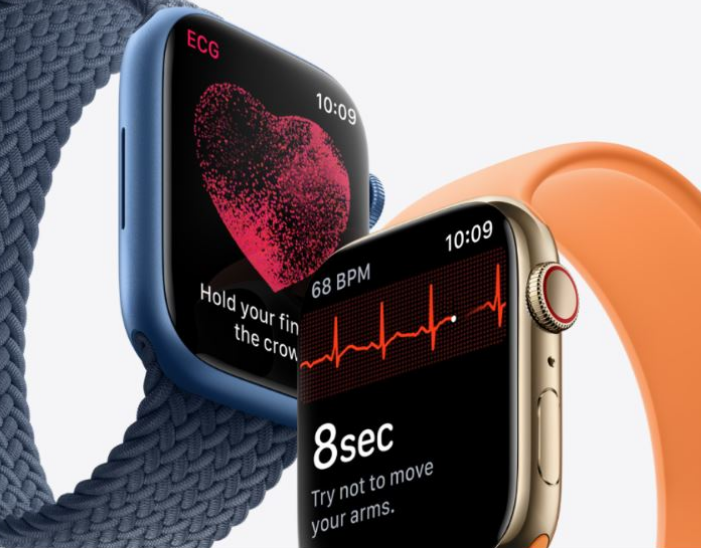 The release came as the pandemic-driven stay-at-home trend and rising health concerns have fuelled the popularity of smartwatches fitted with health care and fitness features./ Representational Image | Twitter

Tech-giant Apple has released the new Apple Watch Series 7 on October 15. The move is expected to boost Apple's presence in the smartwatch market which is ever-expanding.

The release came as the pandemic-driven stay-at-home trend and rising health concerns have fuelled the popularity of smartwatches fitted with health care and fitness features.

The latest Apple smartwatch comes with a 20 percent bigger screen and a 40 percent thinner body than the Apple Watch Series 6. Its battery runs for 18 hours, like the previous model, but charges 33 percent faster.

It also supports advanced health and fitness tools, including an ECG app that records one's heartbeat and rhythm using the electrical heart sensor.

According to industry tracker Counterpoint Research, Apple was the world's largest smartwatch vendor with a market share of 28 percent in the second quarter. Samsung was the No. 3 player with a 7.6 percent share behind China's Huawei, which registered a 9.3 percent share.

The new Series 7 has been launched in all-new green, blue, midnight, starlight, and (PRODUCT) red colours. In addition, the stainless steel models will be available in silver, graphite, and gold stainless steel.

The Apple Watch Series 7 is the first Apple Watch to have an IP6X certification for resistance to dust, and maintains a WR50 water resistance rating, the company claimed.

(With input from IANS)