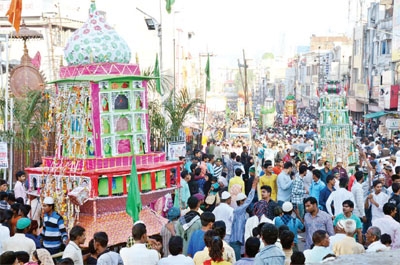 Bakaner: Hindus and Muslims of the region celebrated Muharram with equal enthusiasm here on Wednesday setting an example of communal harmony. Eight replicas of the tomb of Husain, popularly known as Tazia, were taken out in processions to mark the auspicious occasion.

Following the age old tradition these Tazias were prepared with the help of Nazre Hussain Committee under the guidance of Nasruddin. These Tazias though were taken out from various areas of the city, finally culminated at Shankar Mandir Square and Husaini square.

The Tazias saw devotees tying a band on their head which is also known as ‘sehra’ and performing stunts by the Al Husain arena and Al Hasnain arena. People were also offered refreshments and drinks by Kaumi Ekta committee during the day-long celebration. Senior social worker Sunil Jaiswal, district vice president Dr Om Joshi, Zakir Qureshi, BJP municipal president Arun Vaishnav, Manoharlal Chauhan, Sarfuddin Multani and others appealed everyone in the city to celebrate Dussehra and Muharram with peace and harmony.